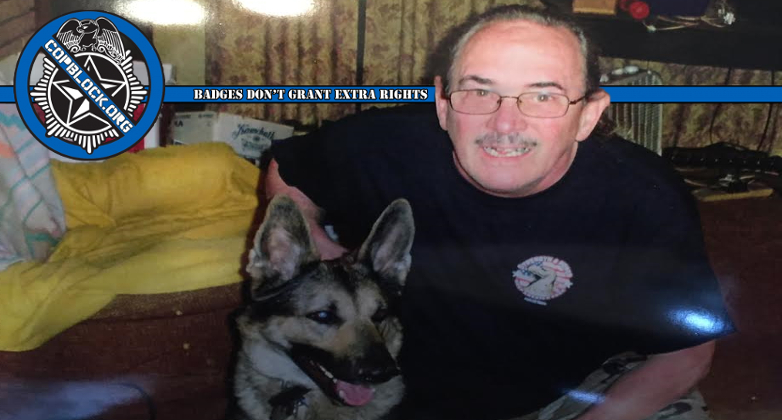 The following Post was shared with the CopBlock Network by Matthew Albert, via the CopBlock.org Submissions Page.

The open letter from Sgt. Gary Aljoe, whose dog “Sarge” was murdered by members of the Buffalo Police Department Narcotics Task Force was originally posted at ArtVoice.com under the title “You Raided the Wrong House and Killed My Dog!”

The execution of Sarge during a raid on Aljoe’s house by Detectives O’Brien and Adams was also discussed in a previous submission by Mathew Albert to the CopBlock Network, which I posted earlier this month.

An open letter from my client, Sgt. Gary Aljoe, a 37 year veteran, to the cops who killed his 8 year old German Shepherd, Sarge, on December 20, 2016, just before Christmas. Sarge was cowering in a corner of a room on a bunk as a search warrant was executed by the most prolific dog killing squad this country has to offer, the Buffalo Police Narcotics Department.

Sgt. Aljoe built schools and clinics in war torn third world nations while in the Army, and provided security at Ground Zero for fellow Americans after 9-11-01, breathing in all sorts of toxins for four months, toxins that still effect his breathing today.

Sergeant Aljoe knew what he was fighting for. He fought for freedom, justice, and the betterment of mankind. His best question to the killer cops: “What is it that are you fighting for?”

You Raided the Wrong House and Killed My Dog!

An open letter from US Army Sgt. Gary Aljoe to Detective Shawn Adams and Lieutenant Sean O’Brien of the Buffalo Police

I am writing to you in regards to the events that occurred on December 20, 2016. As you are aware, you were the team of officers that obtained a search warrant from Buffalo City Court Judge Thomas Amodeo for the house at 85 Ullman Street, executed the warrant, and also executed my dog, Sarge, in the process, without finding anything more than allegedly some residue; found in my son’s room.

Since that time, and going through Christmas and New Years without Sarge, my best friend, I have had nothing to do but think and reflect. With that in mind, I am hoping that, as fellow men in uniform, you will provide me with explanations to certain questions I have.

While you may have not given my dog or I a second thought, after you walked out of the house, these questions have been eating away at me.

As a veteran of 37 years who served his county to try and defend your freedoms, I am hoping you will provide me the courtesy of answering these. For I know that my son is not a drug dealer, and my dog is not a dangerous dog, and offered no threat to you or any officers’ safety.

I am asking these questions not just for myself, or Sarge, who was my best friend, but for every resident of this city who believes the freedom of quiet enjoyment in one’s own home is one we should all enjoy as vital as Americans.

Freedom is what I fought for in my 37 years of military service.

My final question to you is this: By shooting dogs, kicking in doors, locking up so many people, ruining people’s lives over what is in reality for most users is illness and yet still seeing drugs running more rampant than ever in the community, what is it you are fighting for…?  and when is it time to admit that this fight is being fought incorrectly…  that changes in this battle need to be made?