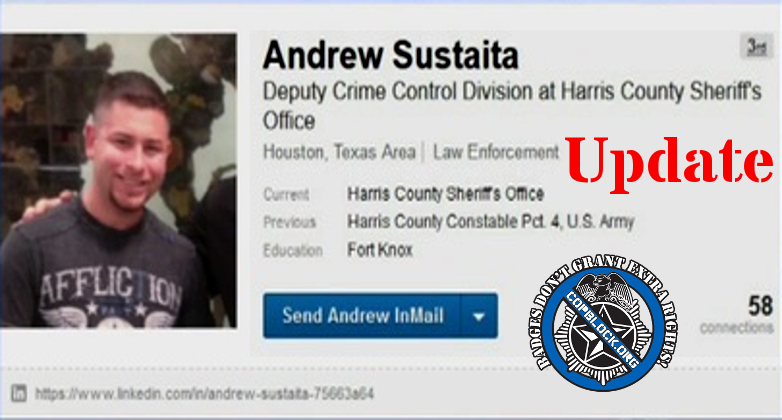 In an update to a story I posted two days ago, it is now being reported that, in addition to having been caught uploading a video of himself raping a dog (using a Harris County Sheriff’s Office computer), Deputy Andrew C. Sustaita Jr. has now been charged with multiple accounts of possessing child pornography.

Andrew C. Sustaita Jr. is a six-year veteran of the Harris County Sheriff’s Office, most recently assigned to the Crime Control Division.

According to charging documents, when deputies searched Sustaita’s personal laptop, they discovered more than 200 child pornographic photos and videos. At least two female victims in the photos appear to be as young as 4 years old, documents say.

Sustaita was identified as a suspect during the course of an investigation managed by the sheriff’s high tech crime unit.

The (original) video reportedly shows him involved in a sex act with a small dog.

No other details have been released.

Not surprisingly, neither his father, who is currently still employed as a HCSO deputy, nor his attorney were ready to make a statement about the allegations against Sustaita. (Because you’re pretty much never ready for that.)