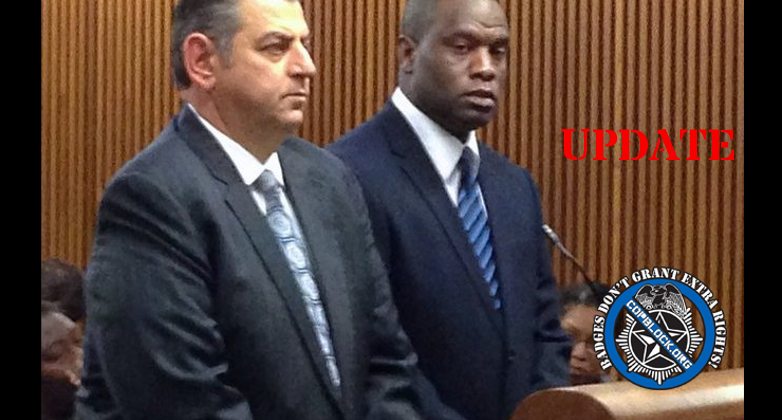 In October of 2015, CopBlock Network Contributor  Deo Odolecki posted about a Cleveland policeman, whose (actual) name is Mister Jackson that was involved in a domestic violence incident. Officer Mister Jackson (I know, it’s awkward) was accused of assaulting a woman and then holding her against her will during the incident.

Since that initial report, more details have emerged. Apparently, this woman was one of two girlfriends that Jackson was involved with while “leading a double life.” Not too surprisingly, the genesis of this domestic dispute was the fact that the woman he assaulted had found out about his other, other half. She then confronted him at that other girlfriend’s home.

At some point, during the ensuing argument, Officer Mister Jackson bit the unnamed woman. And just for good measure he was also holding his gun, while in the process of biting her on the chest. Then, when she tried to flee the house and drive away, he attempted to block the driver side door and prevent her from getting in her car.

She managed to thwart that plan by instead entering from the passenger side. Officer Mister Jackson (it’s fun now) then took things up a notch by jumping in the car himself and pulling on the steering wheel as she was attempting to pull out of the driveway. The fairly predictable result was that the car ended up crashing into a house.

While Cleveland Police Patrolman’s Association President Steve Loomis was quick to assure everyone that the union wasn’t going to be “rushing to judgment about the incident,” one might think that this would be the last chapter in this guy’s police career and he would have to go back to being referred to as Mr. Mister Jackson again.

Of course, you’d have to be pretty naive and really just not paying much attention to actually think that, though. Earlier this week, Officer Mister Jackson pled guilty to a misdemeanor charge of attempted assault in a plea deal offered by the Cuyahoga County prosecutors. As part of the deal, his original charges of abduction, assault, aggravated menacing, and attempted felonious assault were all dropped.

The other part of the deal was that Officer Mister Jackson was not required to surrender his law enforcement certification or even to resign from the Cleveland Police Department. As has been evidenced here at the CopBlock Network over and over and over (etc.) again, it’s not at all unusual for cops to get off with a Policeman’s Discount on the rare occasions they are even charged.

No doubt, if he’s ever even so much as fired (which there is no guarantee of) by the Cleveland PD, once he completes the minor suspension, community service, and/or probation he eventually will receive for what anyone else would be a felon for, he’ll have had plenty of time to update his LinkedIn profile and resume in order to get hired with another department as soon as his wrist stops hurting. It’s pretty much guaranteed that no questions will be asked.