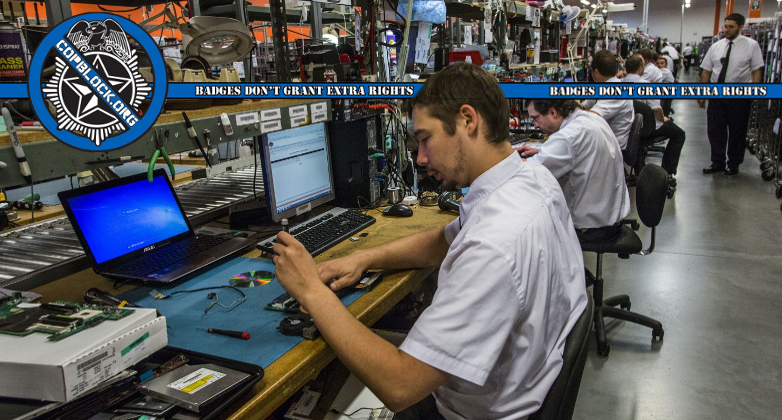 A lawyer representing a man facing trial over data found on the hard drive of his computer while he was having it repaired at Best Buy has exposed the fact that the FBI maintains a policy of paying “Geek Squad” supervisors for reporting potentially illegal content they find on customers’ computers.

Beyond the simple breach of trust that this entails between a business and its customers this also poses some security issues, due to the fact that it has prompted Best Buy employees to probe beyond what would be necessary to perform the services they were contracted to conduct.

Within that context, the nature of the paid relationship between those supervisors and the FBI also raises many issues of the legalities of circumventing evidentiary rules that normally apply to searches. Defense attorney James D. Riddet even went so far as to say that Best Buy could be effectively acting as a branch of the FBI.

At a giant Best Buy repair shop in Brooks, Ky., Geek Squad technicians work on computers owned by people across the country, delving into them to retrieve lost data. Over several years, a handful of those workers have notified the FBI when they see signs of child pornography, earning payments from the agency.

The existence of the small cadre of informants within one of the country’s most popular computer repair services was revealed in the case of a California doctor who is facing federal charges after his hard drive was flagged by a technician. The doctor’s lawyers found that the FBI had cultivated eight “confidential human sources” in the Geek Squad over a four-year period, according to a judge’s order in the case, with all of them receiving some payment.

The case raises issues about privacy and the government use of informants. If a customer turns over their computer for repair, do they forfeit their expectation of privacy, and their Fourth Amendment protection from unreasonable searches? And if an informant is paid, does it compromise their credibility or effectively convert them into an agent of the government?

Best Buy searching a computer is legal — the customer authorized it, and the law does not prohibit private searches. But if Best Buy serves as an arm of the government, then a warrant or specific consent is needed. And a federal judge in the child pornography case against Mark Rettenmaier is going to allow defense attorneys to probe the relationship between Best Buy and the FBI at a hearing in Los Angeles starting Wednesday.

“Their relationship is so cozy,” said defense attorney James D. Riddet, “and so extensive that it turns searches by Best Buy into government searches. If they’re going to set up that network between Best Buy supervisors and FBI agents, you run the risk that Best Buy is a branch of the FBI.”The FBI and Justice Department declined to comment. Federal prosecutors argued in California that when a technician doing repairs “stumbles across images of child pornography” and the government wasn’t aware of the search, “the technician is clearly not performing the search with the intent of assisting law enforcement efforts.”

Best Buy spokesman Jeff Shelman said in a statement Monday that “Best Buy and Geek Squad have no relationship with the FBI. From time to time, our repair agents discover material that may be child pornography and we have a legal and moral obligation to turn that material over to law enforcement. We are proud of our policy and share it with our customers before we begin any repair.”

Shelman added, “Any circumstances in which an employee received payment from the FBI is the result of extremely poor individual judgment, is not something we tolerate and is certainly not a part of our normal business behavior.” Court records did not detail how often or how much the technicians were paid, other than one $500 payment to one supervisor.

But emails between Geek Squad technicians and FBI agents in the Louisville field office indicate a long-running relationship. In revealing those publicly in a Dec. 19 order, U.S. District Judge Cormac J. Carney required technicians and agents to take the witness stand this week. The ruling was first reported by Orange County Weekly.

Many of the documents establishing the ties between the FBI and the technicians are sealed, but Carney discussed some in his order. He noted that the FBI acknowledged it considered technician supervisor Justin Meade a confidential human source for all but a few months between October 2008 and November 2012.

In an internal FBI communication in July 2010, Agent Tracey L. Riley told her supervisor that “Source reported all has been quiet for about the last 5-6 months, however source agreed that once school started again, they may see an influx of CP [child pornography].” Meade was later identified as the “source.” Other internal communications show the “source” referring possible cases to Riley from computers sent to the Geek Squad from across the country.

“This two-way thoroughfare of information,” Riddet, the defense attorney. argued in his motion to suppress the evidence, “suggests that the FBI considers [Meade] . . . to be a partner in the ongoing effort of law enforcement to detect and prosecute child pornography violators. . . . Here it is very clear that Best Buy, and specifically the supervisor who reports its technician’s discovery of ‘inappropriate’ content on customers’ computers, are not only working together, but actually planning to conduct more such searches in the future.”

Originally, computer techs who came across things of that nature would report it, but they weren’t actively searching for incriminating data. Now however, the Feds actually have employees of computer stores on the payroll creating an incentive for them to look for a reason to report their unwitting customers to law enforcement.

As the Washington Post story points out, that includes evidence of an ambiguous nature that potentially wasn’t placed on the computer by its current owner. That sort of evidence would not hold up in court, but because it’s coming from a perceived third hand source it is now accepted as legitimate.

Big Brother has found his latest loophole and it won’t be long before they expand it to other information and potential thought crimes.