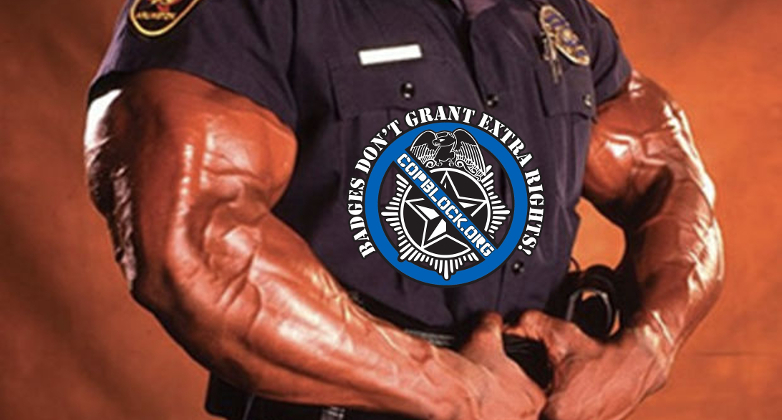 If you need any more proof that the war on drugs is just a war on people, even the police are using prohibited substances to get an edge at work. Ironically, they’re also getting arrested for it, but the fact that even members of the State’s domestic military disregard the laws they pretend to uphold shows the true absurdity of prohibition.

In this case, Michael Andrews, an officer with the Galveston police was arrested, after a separate agency outed him to his department for being in contact with a suspected supplier of steroids. Michael Andrews was probably just trying to be, in his mind, a better cop and the stronger he is the better he can police other drug users. The hypocrisy is glaring. Drugs are illegal and cops are legally obligated to uphold the law. In the four years that he was a cop, I cant help but wonder how many innocent people he subjected to arrest and cages for being in possession of a controlled substance?

The arrest occurred on Friday and Andrews was charged with possession of a controlled substance and his bond was set at $5,000. He was also placed on administrative leave pending the outcome of an internal investigation.

“The Galveston Police Department takes the integrity of its officers extremely seriously and assures the community that any violation of that integrity and public trust will be dealt with swiftly and appropriately,” the department said in its release.

On Tuesday, January 10th, the Galveston Police Department was contacted by an outside law enforcement agency concerning an ongoing investigation involving the distribution of steroids in the Galveston area. At this time the department was informed that one of its officers had been in contact with the suspected supplier. The Galveston Police Narcotics Division is continuing the investigation and as of today, Officer Michael Andrews has been arrested and charged with the offense of Possession of a Controlled Substance, Penalty Group 3 with a bond set at $5,000.

This investigation is still ongoing, and as such, no other details can be released in order to preserve the integrity of any future criminal proceedings. Officer Andrews has been placed on administrative leave pending the outcome of both the criminal and an internal investigation. Andrews has been with the Galveston Police Department since December of 2012.

The Galveston Police Department takes the integrity of its officers extremely seriously and assures the community that any violation of that integrity and public trust will be dealt with swiftly, and appropriately.