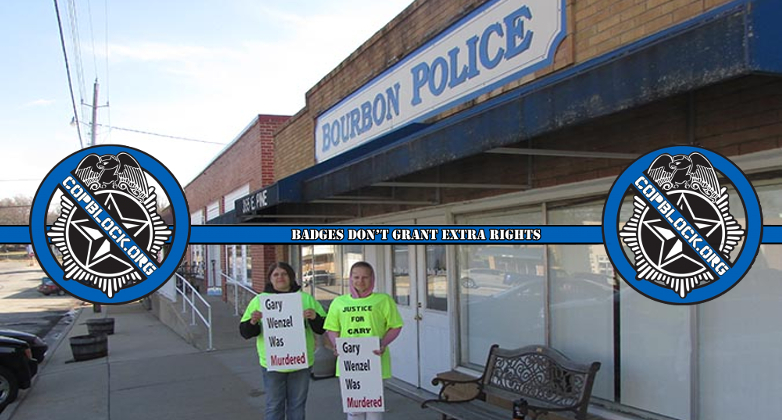 The following was shared anonymously VIA the Submit page. If you have a story involving police misconduct, abuse, or corruption please share it with us. As there are so many stories of police abuse and corruption it is nearly impossible for us to cover them all. If you would like to take a larger role in spreading the message that badges don’t grant extra rights check out the CopBlock Network and become a contributor today!

On 3-5-14 , Bourbon Police Officer Carl Storm was on routine patrol on the north outer road inside Bourbon, Mo city limits. Officer Storm observed a black color car driven by Gary Wenzel. Officer Storm made a u turn and a high speed chase was initiated. This chase went through three counties, Gasconade, Franklin, and back into Crawford County. Never once did Crawford County dispatch notify any of these jurisdictions that there was a high speed pursuit in their area.

After approximately 12 minutes, Gary Wenzel stopped his car and exited the driver’s door and approached officer Storm with his hands OPEN and EMPTY , Officer Storm shot Gary Wenzel three times in the left leg, the chest, and the BACK of his head. Gary Wenzel died on the scene.

Six days later the Sheriff of Crawford County, Randy Martin, held a coroner’s inquest into the death of Gary Wenzel. Randy Martin hand-picked six men from the county to set on the jury. One of those men, Ken Crowder, has been receiving money from the city of Bourbon since at least 2009.

An edited version of the dash cam video was played, which CLEARLY showed Gary Wenzel was unarmed, hands OPEN and EMPTY and Gary falling on the ground. However, the audio was never engaged on the dash camera, because Officer Storm turned it off. Troop I’s division of drug and crime control unit investigated this shooting. After two months and 225 pages…They NEVER reached a conclusion.

On 11-18-16, under a federal court order, the unaltered autopsy report of Gary Wenzel was provided to my attorney. The original autopsy report in the state patrols investigation was altered. Specifically, the trajectory and the entrance of the head shot. Gary Wenzel was shot with hunting ammunition, this fact was withheld from the public.

Is it legal for police departments to use hunting ammunition on human beings???

Also, according to Bourbon city’s use of force report, the police car could have been used as a weapon. Officer Storm only used deadly force against Gary Wenzel even though he had a baton, mace, and taser on his duty belt at the time of the shooting.

I know that Randy Martin ( Sheriff of Crawford County) lied, withheld evidence, and even manipulated the original autopsy report because his son Derrick Martin held a vendetta against Gary Wenzel. I have internal department memos that were sold to me that were sent by Derrick Martin from the Franklin County Sheriff’s Department with Sheriff Toelkes handwriting on them.

The first one states information from Deputy Martin Badge #1189: “for those of you who do not know Gary Wenzel he is dangerous.” That was sent in October of 2013, less than five months before Gary was murdered.

On the incident report from Crawford County dispatch at 10:38 a.m., Officer Storm was in pursuit of a black Chevy cavalier on the north outer road. At 10:39:08, Sheriff Randy Martin states there are multiple 99’s (warrants). However, Gary Wenzel was not identified by Officer Storm until 10:41 as the possible driver. These so called warrants never existed. Gary Wenzel had NO warrants. I want to know how Randy Martin knew there were warrants almost two minutes before the driver was identified???

The front page of the autopsy report states “lengthy police pursuit ended when suspect wrecked his car and refused to take his hands out of his pockets; city officer shot him multiple times.” The pathologist stated under oath that information came from Crawford County coroner’s office. Yet, the video shows his hands were never in his pockets. This shooting happened in broad daylight on a back road with no other witnesses around.

I believe Gary Wenzel was murdered. Why else would an officer have used hunting ammunition to shoot him in the BACK of the head???

Was Gary Wenzel Murdered? Watch the video and decide for yourself.