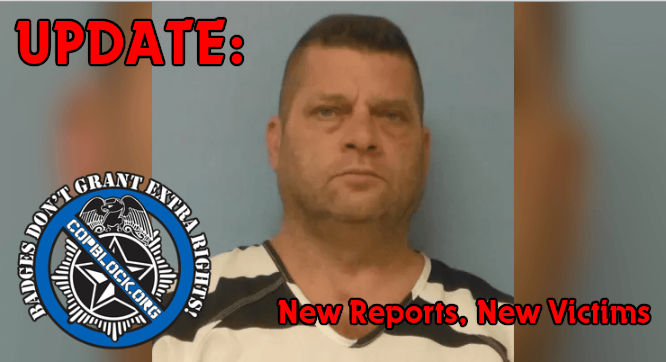 Earlier, a story broke concerning a Cleveland police officer who was arrested after pistol whipping and raping his girlfriend. As the investigation continues, more details about Officer Tommie Griffin’s sordid past are coming to light.

Officer Tommie Griffin had previously illegally restrained a different woman and then forced himself on her. That incident happened on Oct. 9, 2009.

According to Griffin’s file, which has now been released to the media, the victim ran into Griffin at a Parma bar. She knew him from a previous job and also through Griffin’s ex-wife. She told investigators she knew him as “Uncle Tommie.” The two talked and eventually Griffin drove her to another bar, where they continued drinking. He was supposed to drive her back to the first bar, but drove to his home in order to show her his dogs.

The woman told police that she wanted to drive because Griffin was “wasted,” but when she told Griffin this, he replied: “I’m a f—— cop, I won’t get into trouble,” the report says.  Griffin then forced himself on the woman at his home, despite the woman telling Griffin “no” several times. The woman told Griffin she was married, but Griffin persisted.

At one point, Griffin grabbed her and the woman covered her mouth so he couldn’t kiss her. He grabbed her hand and pulled it away from her mouth, scratching her cheek in the process. He tried to kiss her again and the woman said she was able to clench her mouth. She broke free from his grasp, walked outside and called and texted a family member to pick her up, the report says.

Griffin came outside with his dogs “as if nothing had happened,” the investigative report says. He gave the woman dog treats to give the dogs, but the dogs ran down the street.  Griffin ordered the woman into his truck so they could catch the dogs. The woman refused, but Griffin told her to “get in the f——- truck,” the report says. The woman got into his truck and the two found one of the dogs.

Griffin then told the woman to drive his truck, while he searched on foot. The woman drove away and called a family member, who picked her up after she drove back to Griffin’s house.  The woman had injuries to her lip and hand. She told investigators later she was frightened because Griffin is a police officer and that she had heard that he was abusive to women in the past.

Parma detectives gave the woman a device that recorded phone calls. She later called Griffin, who didn’t deny any of the allegations made while recounting them to Griffin during the phone call.  Griffin asked the woman for forgiveness and said he was extremely drunk. He also offered to let the woman punch him “square in the face,” the report says.

The woman continuously told police that she wanted to pursue prosecuting the case.

“I want him to feel the pain, anger and anxiety I have felt since this happened,” according to a statement the woman gave to Parma police at the time. “This incident made me realize you cannot trust [anyone], not even the people who you think you might know, or who are there to protect you. I am disgusted with the whole situation. May he get what he deserves.”

Griffin eventually pleaded guilty to misdemeanor criminal mischief and was sentenced to pay a $400 fine.