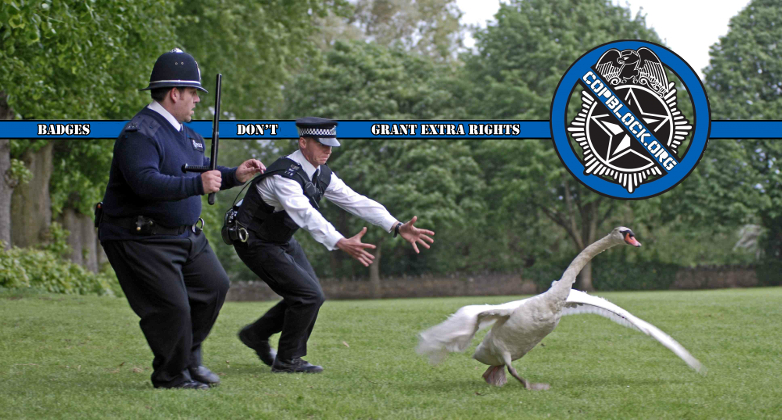 Dan Swindell didn’t mind being pulled over and ticketed for rolling a stop sign on the way to the grocery store. It was when the Pennsylvania State Trooper Donald R. Ament Jr proceeded to break every traffic law including rolling a stop sign that left a sour taste in his mouth about the lackadaisical manner in which the police disregard even the simplest of laws. The only advice I would offer to Dan is to film the next time he chooses to call out the police for breaking the laws.

If you have a story about police misconduct and brutality please share it with us VIA the Submit page. If you would like to be a more integral part of spreading the message that badges don’t grant extra rights, consider joining the CopBlock Network and filling a role that fits your schedule.

On January 15, 2016 I was traveling from Best Buy back to my small corner market located in town when I was pulled over by Pennsylvania State Trooper Donald R. Ament Jr .I was surprised since I was traveling the speed limit on a country road. The trooper followed me for a while then pulled me over after about a mile or so. Trooper Donald R. Ament Jr asked were I was coming from and I told him, Best Buy. He then asked if I new why I was being pulled over and I told him, No. He stated a few farms back I did not come to a full stop at a sign prior to making a turn. I said if you are telling me I did, then I believe you, but I did not realize I had done that. He wrote me a ticket for $128.50 for failure to stop or be flagged to proceed through a stop sign.

Being that his driving appeared to unsafe, I followed him past my store and he pulled into a church were he did a U-turn in the parking lot. He approached facing me while I signaled his attention. Trooper Ament pulled up and with a disgusted look on his face asked what I wanted and I explained that he was speeding through marked 34 MPH zones. He was really disgusted now and said no he didn’t. I told him yes you did. I told Trooper Ament I had been behind him for at least 5 miles since pulling out of the stop at Nazer’s Market in Unity. I also told him that he did a rolling stop through the blinking red light four way stop.

The trooper, then really disgusted said then just turn me in. I told him I wasn’t looking to turn him in, but felt the need to alert him that if those emergency lights are not on, then he is required to follow the same laws as me. What’s good for the goose is good for the gander. Well at this point Trooper Ament was irritated and said just turn me in as he drove away. I had no plan to turn him in, but after that encounter he seemed entitled, arrogant and above the law.  Afterwards I called the Pennsylvania State Police and explained the situation. The head officer was not in, but an officer took the message and said he would call as soon as he was back in the office.

Within five minutes the head managing officer called me back and I explained everything, including the original traffic stop. He said the trooper had called in and my account of events matched the officers. He said he would talk to Trooper Ament and let him know he needs to follow the speed limit. His remark that Trooper Ament may have just been having a bad day. Well I wish that was a good defense, but the last I checked it was not.

What’s good for the goose is good for the gander. So where is his citation for breaking multiple traffic violations? Oh wait, officers are above the law and they cover each others back. I am sure nothing came of it and the troopers will continue to issue traffic citations to others while Trooper Ament continues to violate them. Ethics is what you do in the dark when no one is looking and maintained through our entire everyday life no matter what. I can contest that Pennsylvania State Trooper Donald R. Ament Jr demonstrated poor ethics and a demeanor that puts him above the law. I have the highest respect for the officers, but not this one.