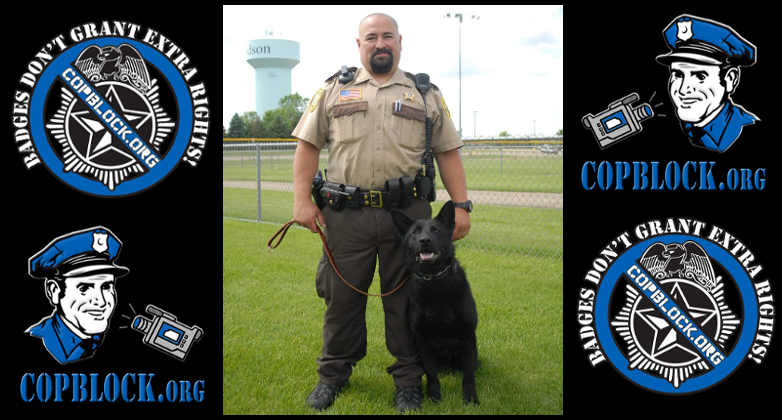 Deputy Ryan Fowler of the St. Croix County (WI) Sheriff’s Office reportedly had consumed between 12 and 26 shots of vodka within a three hour period before he was arrested in October. Further investigation revealed that he had also taken prescription medications prior to drinking that night. He also admitted that it was possible he had drank even more alcohol in his hotel room.

Deputy Fowler and three other St. Croix officers had been assigned to duty as part of the police response to the protests against the Dakota Access Pipeline on the Standing Rock Indian Reservation outside of Bismark North Dakota at the time. As a result of the arrest, they were all four sent back to Wisconsin.

Fowler was discovered by Bismark police passed out in his police K-9 vehicle, which was running and in drive at the time. Officers who arrested him were investigating a report that he had been involved in an altercation (possibly with another cop) and subsequently stolen a sweatshirt from a man who had previously woken him up after seeing him asleep in his squad car.

In spite of the fact he was caught in a police vehicle, Deputy Fowler initially lied to the officers, stating his name was “John.” Upon searching the squad car, his real name was discovered once Fowler’s ID, as well as the stolen sweatshirt, was found. Eventually, after a paid vacation of about a month and a half, Fowler was allowed to resign instead of being fired.

Via the Twin Cities Pioneer Press:

Bismarck police were dispatched at 11:34 p.m. Oct. 12, after a gas station attendant called on behalf of another man.

That man, identified as Daylan ChasingHawk, reported a fight at the Comfort Inn Hotel, where he claimed he witnessed a deputy drunk inside his squad car. The deputy stole ChasingHawk’s sweatshirt, according to a 911 call.

An officer arrived to find a St. Croix County sheriff’s squad car in the driving lane at the hotel. A look inside revealed a sleeping man in the driver’s seat and a police dog inside. The car was running.

The officer “noticed that the squad was in drive and Deputy Fowler had his foot on the brake,” the report states. She and other officers had to beat on the car’s window for more than a minute before Fowler stirred.

Fowler stepped out of the car and smelled strongly of alcohol. When asked his name by the officer, he told her it was “John.” Officers later learned his actual name after finding his driver’s license inside the car.

A sweatshirt was also found inside the vehicle. Other Bismarck officers were interviewed during the investigation, including one who relayed ChasingHawk’s account: That he encountered Fowler asleep in the squad car, shook him until he woke and received an offer from Fowler to buy his sweatshirt for $5.

“The deputy drove off in his squad car, with Daylan’s sweater and hadn’t paid Daylan the $5,” according to the officer’s statement.

Fowler was arrested and taken to the Bismarck Police Department, where a breath test revealed a 0.23 blood-alcohol concentration.

Asked by Bismarck police how much he had to drink that night, Fowler said he had three drinks in the hotel bar and one in his room, prompting the officer to ask if he had more after he got back to his room. “Deputy Fowler stated that it was possible,” the report states…

Borgschatz learned the incident was preceded by an incident in Fowler’s hotel room at about 10:30 p.m. Oct. 12, when a Dane County (Wis.) deputy heard loud sounds coming from inside the room. The deputy later went to the room and told the men inside — a K-9 handler and another officer — to quiet down.

St. Croix County Sheriff’s Deputy Ryan Kelly, also a member of the four-person assignment, had earlier told Borgschatz that he and Fowler were in the room playing with Fowler’s police dog, Dugan, when they were told to be quiet.

“It seemed likely that Deputy Fowler, Deputy Kelly and the canine were only playing and the disturbance was due to the playful conduct with the dog and not any altercation,” the report states.

The Dane County deputy said as he was going back to his room, he saw one of the room’s occupants heading toward the exit with a dog.

He said he took medication before going to the hotel bar, where he had “four or five” vodka-Red Bull drinks. Fowler said he had set an alarm for 9 p.m. that was going to be his reminder to go to bed, but he hit the snooze button since he had a full drink in front of him. He said he and Kelly stayed for another drink after that.

Fowler said that was the last thing he remembered, but noted that he didn’t feel drunk at the time. He said his first recollection after that was looking at paperwork inside the Bismarck police station. The medication, he later said in the interview, was a mitigating factor in the incident.

“Fowler is excusing his behavior because of a new prescribed medication,” the report states. “He was not able to admit that being a 0.234 affected [sic] his decision-making or memory. He blamed the bartender for getting him intoxicated.”

Borgschatz, who inspected the bar pours — 50/50 mixes, she reported — at the Comfort Inn as part of her investigation, concluded that Fowler had between 12 and 26 shots of vodka in less than three hours.

“It is likely he had more than 15 shots of vodka,” the report states.

As part of the internal investigation Deputy Fowler maintained that he should not have been arrested for some unexplained reason:

“Deputy Fowler stated he believes he should have never been arrested but wasn’t able to articulate what made the incident an unwarranted arrest,” the report states. “He only stated the whole situation should have been taken into account.”