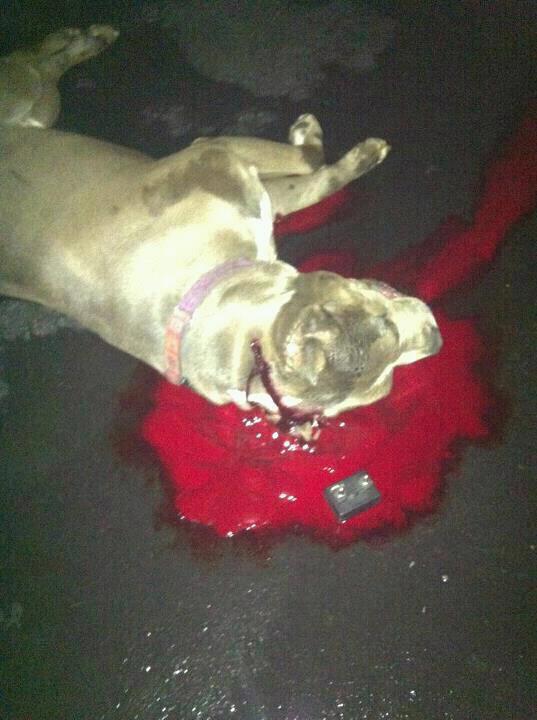 Despite his department’s slogan of “Do The Right Thing!” when it comes to teaching children to do good at school, get good grades, respect adults, stay out of trouble and tell the truth, Monroe County, N.Y. Sheriff Patrick O’Flynn “Did The Wrong Thing” on Friday, June 15, 2012 when, as an elected official, acted like a typical politician, by intentionally waiting until the weekend to announce what he knew would be very unpopular news.

O’Flynn decided that the execution style killing of an innocent, loving and well trained family pitbull named Diablo, in the Town of Penfield, N.Y., a suburb of Rochester, N.Y., by Monroe County Sheriff’s deputies Shaun LeClair, and Matt Clancy, was justified.

Monroe County, N.Y. Sheriff Patrick O’Flynn, has not only justified the execution of an innocent pet by his trigger happy deputies, Shaun LeClair and Matt Clancy, but O’Flynn has also intentionally and maliciously lied in an attempt to “cover up” his deputies’ corrupt and rogue actions.

LeClair and Clancy fired at least four rounds at Diablo, with at least one of those rounds penetrating through the home’s garage door, ricocheting off the cement floor then going through a garage window, nearly missing a house next door.

Perhaps, one of the most disturbing things is that it appears Diablo was shot in the back of his head, which would indicate that he was retreating, and therefore would contradict O’Flynn’s claim that the dog charged at deputies in an “extremely aggressive manner.”

Patrick O’Flynn, who initially stated that his deputies were dispatched to the home for a call about a house party, changed his story less than 48 hours after the shooting, saying that the reason they went to the home on Whitney Rd. was for an illegally parked vehicle in front of the residence.

Gary Brockler, Diablo’s owner was in his living room watching a movie when he heard what he describes as several loud bangs. When he opened his front door and walked outside he saw Shaun LeClair, Matt Clancy and several other Monroe County Sheriff’s deputies, and his dog Diablo, laying in a pool of his own blood in the driveway.

When asked why it takes several officers for an illegally parked vehicle, O’Flynn stuttered, back pedalled, then stated “That is what I am trying to determine”.

In announcing his decision that his deputies were justified, O’Flynn made no comments as to why it would take several officers to come tell someone that their vehicle was parked illegally. The only thing O’Flynn said was that the responding deputies were alerted by a Monroe County Sheriff’s Sergeant who had driven by Mr. Brockler’s residence and noticed the illegally parked vehicle but according to O’Flynn “had no citations with him” so therefore could not write any tickets. That still doesn’t answer why it took several Monroe County Sheriff’s deputies to respond for an illegally parked car.

On Tuesday, June 5, 2012, shortly before I held my first “Rally for Diablo” outside the Monroe County, N.Y. Sheriff’s department headquarters located at 130 South Plymouth Avenue in downtown Rochester, N.Y., Patrick O’Flynn was on a local morning radio show laughing about the planned rally outside his office.

At one point, when the radio show’s on air personalities joked with O’Flynn about “a bunch of people holding candles for some dog”, and asked O’Flynn if he would be watching the rally from his office window, O’Flynn laughed and said he would.

It was on that same radio show appearance where Monroe County, N.Y. Sheriff Patrick O’Flynn continued his cover up of the incident and, in a commonly used law enforcement tactic, and a clear attempt to take attention away from the public’s outrage of his department’s execution of an innocent pet, O’Flynn announced that someone had posted a $ 1,000 bounty on facebook for anyone who would shoot the deputies involved in the shooting and killing of Diablo.

And, as expected, local media ran with the story, and, along with O’Flynn continued to spin this injustice, and take the attention away from the real issue– that Monroe County Sheriff’s deputies Shaun LeClair and Matt Clancy illegally entered Mr. Gary Brockler’s private property, and executed his dog, firing at least 4 shots, recklessly putting innocent people’s lives at risk.

Since O’Flynn made that carefully planned, and obviously false statement of a $ 1,000 bounty offer to anyone who would shoot  the two deputies, he has not once, made any other comment about the “alleged” offer.

It’s interesting that, with today’s technology, where just about anything and everything can be traced through a person’s “ip address”, etc., that if in fact such an incident had occurred, where someone used the internet to threaten the lives of two deputies by offering a “bounty”, no one in the Monroe County, N.Y. Sheriff’s department, which by the way, is right next door to the brand new state of the art Monroe County, N.Y. Crime Lab, has commented on this incident. No one has given any updates on any investigation in locating this individual. And, no one has been arrested.

In light of Monroe County, N.Y. Sheriff Patrick O’Flynn’s decision that his deputies Shaun LeClair, and Matt Clancy, were justified and “did their job” in executing Diablo, an innocent, loving family pet pitbull, on Friday June 1, 2012, in Penfield, N.Y. and being that Patrick O’Flynn serves as a board member of the Humane Society of Rochester, New York, since there was NOTHING “humane” about an innocent pet being executed on his own property, shot in the back of his head, I am demanding that the Humane Society of Rochester, New York, which usually has NO problem whatsoever charging people with Animal Abuse and Cruelty charges, not only denounce this execution, but also immediately remove Monroe County, N.Y. Sheriff Patrick O’Flynn from their Board of Directors!