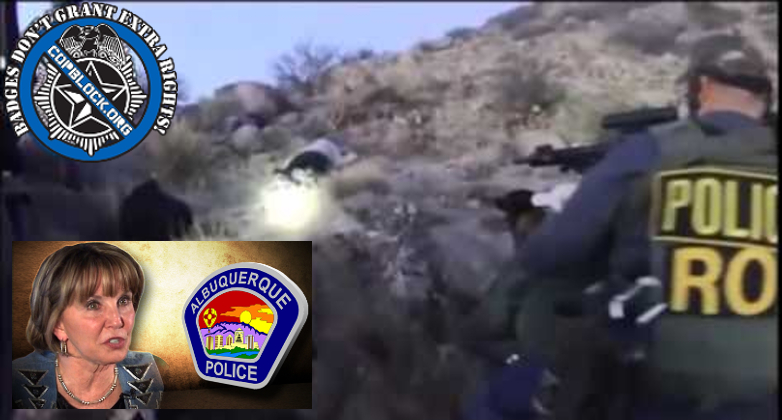 As she left office last month, Bernalillo County District Attorney Kari Brandenburg stated in a letter (embedded below) to U.S. Attorney Damon Martinez that the Albuquerque Police Department is comparable to a “criminal enterprise.” Brandenburg had decided not to seek a fifth term after she was targeted by the police, their union, and other politicians.

The reason for the harassment leveled at her and toward her family was that for the first time in her 14 years as a prosecutor she had chosen to file charges against cops. Within that same letter, Brandenburg also admitted that prior to that case she had refused to ever charge police officers. However, when video (embedded below) of APD Officers Keith Sandy and Dominique Perez executing James Boyd, a homeless man who had been camping just outside the city, was released, the publicity it generated and the clear evidence it showed forced her hand.

Brandenburg charged Sandy and Perez with murder and as the APD revenge campaign against her began any allies she had within the local government either turned on her or scrambled for cover. The very fact that she had charged two cops was even used to discredit her ability to run the prosecutor’s office by painting her as biased against the police. Brandenburg, who at one time was considered the most accomplished woman ever to work as a prosecutor, suddenly was being accused of incompetence and even found herself and her children the subject of criminal investigations.

Throughout the letter, Brandenburg referenced this retaliation she had faced as well as past acts of retribution the Albuquerque Police Department had directed against people that had dared to cross them. In addition, she mentions allegations from former Albuquerque Police Department records supervisor Reynaldo Chavez that body camera footage from shootings was edited or deleted. And in one of the opening paragraphs she acknowledges the worst kept secret on this and several other planets, that as a district attorney she absolutely refused to bring charges against police officers prior to the Boyd case.

Below are excerpts from that letter:

When we made the decision in October 2014 to prosecute the officers in the Boyd shooting, a firestorm ensued that called into question the integrity of the eintire Bernalillo County Criminal justice system…

Since the Settlement Agreement was reached between APD and the Department of Justice, we have seen little progress. Please refer the independent monitor’s reports for more specific information. In his most recent report, James Ginger, noted the behind the scene reality was that APD has “almost no appetite for correcting behavior that violates existing policy.” Further, it was pointed out that investigations looking into use of force by officers appears “…preconditioned to rationalize or explain away officer conduct.” Throughout the monitoring process, APD has failed to comply and meet agreed upon standards and measures. In fact, their performance can accurately be characterized as grossly noncompliant.

In addition to failing to meet their obligations under the Settlement Agreement, other issues have arisen, calling into question the integrity of APD, and thus all agencies in the criminal justice system. Such includes numerous and serious alleged violations of IPRA in an attempt to cover up wrong doing, editing, deleting, and/or destroying lapel camera video in controversial officer involved shooting cases, a refusal to cooperate, and in fact, hinder Police Oversight Board investigations and recently problems with the APD lab and DNA analysis.

From the outside, looking in, it appears whenever a problem comes up, instead of honestly addressing it, APD engages in a cover-up. Many men and women of APD allege promotions are given to reward those who have “kept quiet” or maintained the chain of command’s version of the “truth”. Given this, change for the better is becoming a more and more distant reality…

Frankly, if any other group of individuals were acting the way APD has allegedly been acting, some of us in law enforcement might refer to them as a continuing criminal enterprise and/or engaged in the act of racketeering.

Of course, while it’s nice to have one of their own officially acknowledge it, none of these “revelations” are in the least bit surprising. While Albuquerque is one of the worst cities nationwide for police corruption, the APD is in no way unique in acting like “a continuing criminal enterprise,” nor was Brandenburg’s office anywhere close to alone in its refusal to prosecute cops.