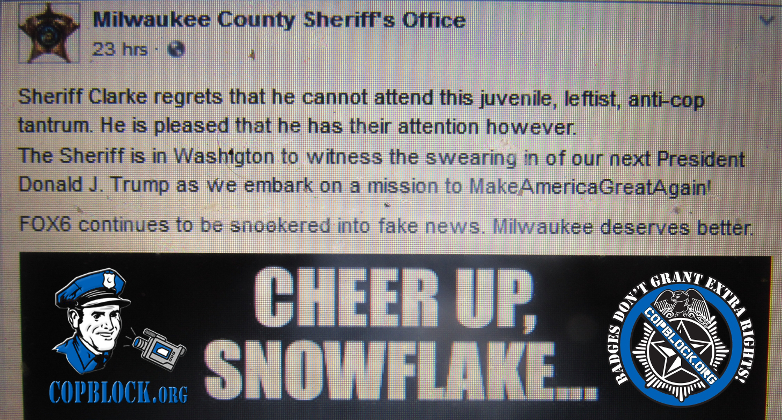 The following article was published on The Pontiac Tribune by the same author:

The Milwaukee County Sheriff’s Office appears stoically undeterred by its recent scathing blunders and scandals. In fact, the agency–and it’s outspoken head, David Clarke–is seemingly emboldened to push the public’s buttons. Amongst the various ways this manifests is on the department’s Facebook page. Most recently, a meme singling out a “juvenile, leftist, anti-cop tantrum”, as the page describes, has quickly gained controversy. (Embedded below.)

Published on January 19th, 2016, the post has already been shared over 2,100 times on social media. “Sheriff Clarke”, the Milwaukee Sheriff’s Facebook post began, “regrets that he cannot attend this juvenile, leftist, anti-cop tantrum.” It goes onto state Clarke is “pleased that he has their (leftists) attention, however.”

Finally, and perhaps most inflammatory, the post relays Sheriff Clarke’s traveling to Washington D.C. According to his department’s Facebook, Clarke seeks “to witness the swearing in of our next president Donald J. Trump as we embark on a mission to MakeAmericaGreatAgain!” Beneath the message, an attached meme depicted a Caucasian man in a cowboy hat. It reads the following clear, controversial message for all to see.

“Cheer up, snowflake. If Sheriff Clarke were to really harass you, you wouldn’t be around to wine about it.” Thousands of comments have flooded in, and its share count continues climbing. Many appear to condemn the post for a variety of reasons. Whereas some residents aren’t clear what message Clarke is sending, others expressed fear. They’re concerned if this rhetoric will encourage police violence, or breed an intimidating air of impunity. Many others found the conduct unprofessional, setting an example for undesired police behavior.

Other comments bashed the city as a whole, a sentiment fed well by Milwaukee’s recent riots. A few tagged mainstream outlets including CNN, FOX 6, and WISN 12 News. The Huffington Post was also tagged, meaning it would be interesting if the story goes uncovered. Milwaukee County Sheriffs, as of yet, hasn’t responded to The Fifth Column’s requests for comment.

Sheriff David Clarke remains one of the most outspoken advocates for Trump. Despite recorded violence at his rallies, Clarke praised Trump as the law and order candidate. He’s also appeared at numerous Trump events as a guest and speaker. Sheriff Clarke also staunchly opposes Black Lives Matter political activity, describing them as “the enemy” in a “war” and a hate group. Clarke has also stated that police brutality ended decades ago, among other controversies.

Recently, Clarke detained a man for “shaking his head” (the man whose picture was used in the previously mentioned meme – Editor) at the sheriff’s sports clothing. The disagreement, International Business Times reports, stemmed from Clarke’s favoring the Dallas Cowboy’s over Wisconsin’s team. While this may seem petty to some, Clarke asked if the man had a problem. Despite stating he didn’t, the man was reportedly later detained and interrogated by Clarke’s deputies for 15 minutes.

Clarke’s department, generally speaking, is no stranger to malpractice scandals. Milwaukee’s jails were recently blasted after the deaths of four individuals–including a baby. In one instance, labeled a “homicide” by the medical examiner, a 38 year old mentally ill man died of “profound dehydration”.

In another, a newborn baby died after a mentally ill mother gave birth. This apparently occurred without staff being alerted to the situation. According to documents, the woman refused medical care throughout that day and, although appeared “sleepy”, was noted as undistressed prior to this incident. Milwaukee Journal Sentinel has described Clarke’s office as “shamefully silent” on the deaths.

With talk of Donald Trump considering Sheriff Clarke as a cabinet pick subsiding, it’s interesting to see this boldness play out. His department’s Facebook banner– half American flag, half Tea Party-affiliated “don’t tread on me” rattlesnake–sets a tone for the agency.

Whereas some local departments, like Wauwatosa PD, post blue lives matter pictures, this is different. Though still subject to debate, “Blue Lives Matter” pertains to officers, not political parties. MSD takes things further, advocating for specific right-wing sects, and their respective candidates. It’s a precedent which goes on tolerated in the city, alongside Clarke’s antics.

These do, however, represent a further evolution of the “us vs. them” mentality prevalent in American policing. Milwaukee’s residents would do wise to take heed to these evolutions. Judging by the comments in MSD’s latest post, locals are already responding en masse.