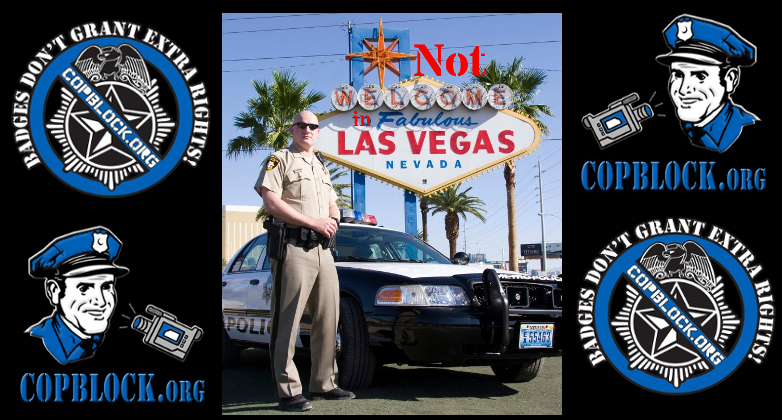 The following post was shared with the CopBlock Network by Arkady Bukh, via the CopBlock.org Submissions Page. In addition, Bukh has previously submitted several posts. Those earlier submissions can be found here, here, and here.

The current submission discusses a raid that the Las Vegas Metropolitan Police Department conducted at a local park where homeless people had attempted to seek shelter from an unusually cold Las Vegas winter. During this raid, which took place in mid-December, the police demanded that those homeless persons gather all of their belongings within an (intentionally) insufficiently short period of time.

They then proceeded to steal tents and blankets that were being used by their owners for shelter from the freezing temperatures, as well as other personal belongings. As is noted in the commentary submitted below, this tactic is not an unusual one for the LVMPD, and likely not a rare instance elsewhere, either.

(Note: previously this same raid was the subject of another post submission that I also published on December 31st. That post can be found here. Although there are slight differences in the details included within the two stories, the basics are pretty consistent within both versions.)

In a pre-Christmas raid, Las Vegas Police swept homeless people from a neighborhood park. During the eviction, the persons inside the square were allowed only 60-seconds to collect their possessions before they were tossed away by police. Officers from LVMPD took blankets, tents.

Las Vegas was enduring historical low temperatures when the raid was conducted. Ignoring laws which allow a reasonable length of time for persons to gather their possessions, or store them for day days, the possessions were thrown into dumpsters.

The type of raid is not isolated or unusual. LVMPD operates following the premise that if life can be made hard for displaced persons they will vanish.

According to witnesses, LVMPD found over 40 individuals in the park during the early morning raid. The homeless were given one minute to gather their possessions. Anyone failing to comply received citations.

One individual, who asked for anonymity said, “We woke, as the cops and maintenance crew showed up with dumpsters as they told the homeless to ‘grab what you want and go.'”

According to Metro’s Sergeant Ryan Cook, the square was selected for the operation on December 1 during a County Multi-Agency Response Team. Cook said the move was in reply to “persons taking up residency in the park.”

Raids like the one conducted in Las Vegas’ Molasky Family Park, located near the UNLV campus are counterproductive according to o the Legal Aid Society.

Taylor Barton, CEO of one of Las Vegas’ bail bonds agencies, 24/7 Bail Bonds, said, “policies would be more sensible if the city staff helped people find out if the cops hold warrants and handle them instead of shocking persons in the thick of the night.”

The LVMPD took 22 people into custody in the raid. Homeless advocates believe these tactics discourage individuals from seeking help.

The Legal Aid Society said it discovered in preceding shelter raids; most persons were detained for trivial quality-of-life offenses and not significant violations. Area homeless advocates said they would continue to attempt to cooperate with the LVMPD.

“There’s no justification for the raids,” said Donna Lieberman, executive director of the region’s American Civil Liberties Union. “Being displaced is not a reason for surmising a person has a bench warrant. This raid runs counter what decency stands.”