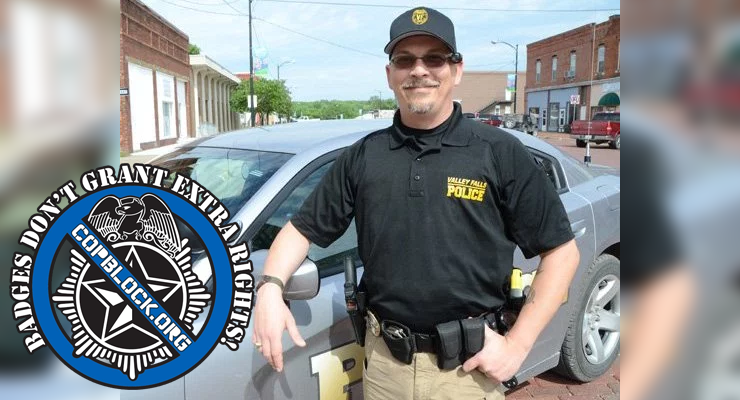 Valley Falls Police Chief Bronson Campbell, formerly the chief of the Enterprise Police Department – residents in Enterprise and Valley Falls complained of excessive force and intimidation under Campbell – was charged last year with dissemination of criminal history record information. The offenses happened over the period of a month and a half from early February to the end of March. Bronson Campbell was police chief of Enterprise at the time he ran an unwarranted NCIC (National Crime Information Center) background check on Larry Jantz, the mayor of Enterprise, KS. Despite being told that he was not to run the check without a legitimate need.

Bill McKeeman, a city council member friendly with Campbell, accessed the Kansas Bureau of Investigation and discovered a felony on the mayor’s record. He then approached Jantz and demanded his cooperation. Jantz claims that “McKeeman told him that if he learned to cooperate his criminal history would not need to go public”. McKeeman denies ever threatening the mayor. However he did phone Campbell and send him screenshots of Jantz’s criminal record.

Campbell then had his wife, a police dispatcher, run a background check on Larry Jantz. He then drafted a letter of no confidence claiming he objected to his direct supervisor being a convicted felon. Ironic since he committed multiple misdemeanors and betrayed the public in order to verify that information.

It is believed that Bronson Campbell ran the criminal records check out of retribution for the mayors stance on a city council members unpaid utility bills. According to the court document. Jantz wanted to pursue consequences against the councilwoman, while McKeeman believed he was mistreating the councilwoman.

According to the bill of particulars on January 9, 2017 the prosecutor filed two additional charges against the police chief: unlawfully requesting criminal history record information and official misconduct. The trial is set for Thursday and Friday.

McKeeman was charged with requesting or disseminating criminal history record information. His case was dismissed earlier this month without prejudice and may be refiled. He was subpoenaed  by the prosecution but his lawyer has so far effectively squashed the subpoena, claiming that the Dickinson County Attorney’s Office granted McKeeman “use immunity,” the agreement doesn’t fully protect him and therefore a privilege — namely the Constitutional right to remain silent.

If the police chief is willing to conspire with a city council member in order to destroy someone they are having a dispute with, can you trust them not to interfere in even less notable cases, would it be possible with corruption that is this ingrained in the foundation of a city’s government? One would have to agree that it would be hard if not impossible to accept a verdict if you were aware of the goings on within the halls of justice and the crimes committed within.

This is not the first time that Bronson Campbell has been caught lying while working as a police chief in Kansas. He lied on an official report to the district attorney in Valley Falls when he filed harassment charged against family that had four years prior been wronged by a police officer with the Valley Falls department.

He also harassed a family after one of their parents filed a complaint against two of his officers when he was working as the police chief in Enterprise. The day after he showed up at their house with child protective services, saying there had been a complaint about the children being unsafe and unsupervised. With everything from bogus warrants to “Protection From Stalking” orders, CAmpbell did everything he could to make their life hell. Even trying to amp up the pressure when the family lawyered up.