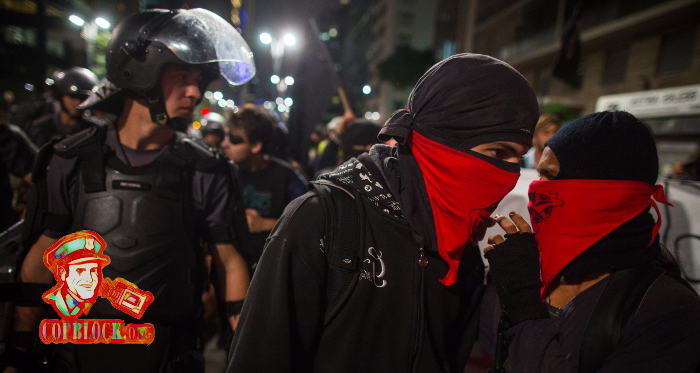 Leading up to, and during the inauguration of that creepy orange dude as the new puppet of the oligarchy’s collective hand, Black Bloc climbed back out of semi-retirement and got all window-smashy on shit again. While they hadn’t exactly been completely inactive the past eight years, they did get relatively quiet compared to them Bush years. I guess unprecedented drug war imprisonments and drone bombings in a record amount of foreign countries just wasn’t that inspiring when done under a democrat president.

I must also question their decision to piggyback onto political events, because doing so only helps to fuel those narratives, and insures your actions will be construed in specific ways by the media and general public. In fact, if I were a Republican president, I would probably want this to happen in order to manufacture consent in moderates and loyal non-partisan nationalists.

To me, it all feels a little too edgelord cliche. I am unable to differentiate it from the antics of Brett Sanders or the numerous other aspiring celebritarians who employ shock value at political systems in order to get facetime. I guess the major difference is that Black Bloc act anonymously and would rather the attention go to the collective group rather than the individual.

Also similarly, I think both left and right shock blockers get a thrill from their activities. They get a rush of adrenaline and confidence from their actions that bolster the sense of importance and worth of their methods.

In other words, they get off on the same shit cops do.

Which is no surprise, since both groups of shock blockers are essentially just alternative policing agencies holding others accountable to their own laws and punishing them accordingly. That is not rebellion. That is how you complete a cycle and build a perpetual motion machine of oppression.

If activists act like cops then they are not the solution to the problem, because THAT IS the problem. And activists who do that are not going to be what delivers us from the hands of the tyrannical ruling class.

Our rescuers will be women and men with better ideas. They will be innovators. Philosophers, inventors and engineers who make the current systems obsolete. They will provide us ideas and technology that pull the carpet out from under that which causes criminality and authority alike.

If you want to make a spectacle, you don’t have to break shit to do it. That is the least imaginative way of all. Instead you could employ creativity and a sense of humor. Replace breaking windows with acts of absurdity that draw attention to you so that you can spread a positive message of what you want to see happening. I guarantee that will be a lot more helpful than childishly reacting to things you don’t like in fits of stompy rage. And your actions won’t be open to public interpretation that discredits you and everyone else fighting to topple our mutual oppressors.

Thanks a lot for that.