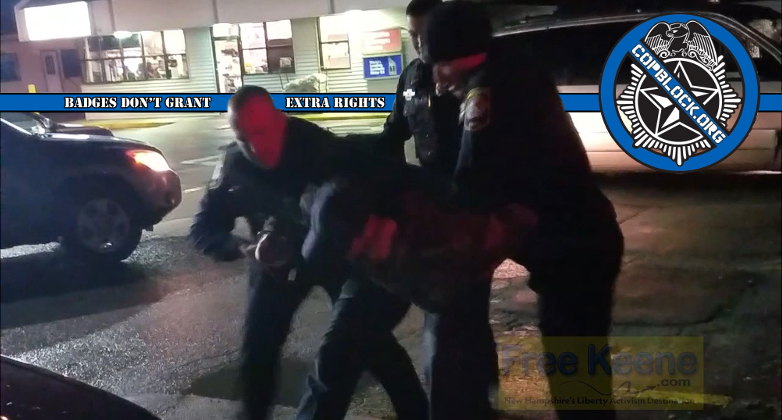 Social media is abuzz as video has been shared of Kristopher Kristolaitis being attacked by police Sunday night at Mr. Mike’s convenience store in Winchester, NH. According to an interview for Free Keene with Kristolaitis, his assailants included Officer Michael Paul Laska of the Winchester Police Department, as well as Corporal Joshua Murray of the Hinsdale Police Department and a third as-yet-unidentified officer. Both Laska and Murray are former Marines. The victim says that WPD’s Laska was the hothead in the video, shouting at the frustrated, angry crowd at one point to “GET BACK!”

Witnesses say Kristolaitis was arguing with another man, Billy Hillock, when someone called over police. Police eventually responded once Winchester firemen came over to see what was going on. Apparently, the firemen were there already on an unrelated situation. As Hillock attempted to leave, police questioned him and let him go, prompting Kristolaitis to ask why. (Hillock is an auto mechanic who happens to work on Winchester PD’s cruisers. Things that make you go hmm…) A Hinsdale officer then asked him his name, to which he responded by saying he’d provide once the officer explained why he let the other man leave. During this interaction, Officer Laska approached Kristolaitis from behind and handcuffed him on one wrist without ever telling him he was under arrest. The witness says this is when the video begins.

Laska appears to kick Kristolaitis for no reason whatsoever then he and the other officers continue to apply unnecessary force to the man who in no way had been violent towards them. Laska is also seen in the video violently wrapping his arm around the victim’s neck, manhandling him, and menacingly shouting at the understandably upset crowd of witnesses. Even the firemen appear to be frustrated at how the officers are handling the situation.

The multiple witnesses are outraged at the behavior of the officers, openly asking for someone to record. Thankfully, at least one person was, and she did a decent job of keeping her camera pointed at the dangerous, adrenaline-pumped officers. New Hampshire police departments have made the news recently because finding police recruits has been difficult. Is it any wonder why? Officers are tasked with arresting peaceful people for victimless crimes like possession of cannabis and over time more and more people fall victim to these “crimes”, which wears away people’s trust in the police. They are frequently seen as a threat to freedom rather than keepers of the peace.

While some who are very familiar with the various incidents of police violence from around the United States will likely watch this video and consider it tame in comparison to other incidents elsewhere, that’s more of a testament to how desensitized to the violence and militarization of the police that we have become. New Hampshire police tend to be better on average than many departments, but “badge-heavy” cops can still be found here, though they are thankfully up against a population who have been raised with the “live free or die” mentality.

Kudos to the good people who called out the police for their bad behavior, while it was happening. If more people shamed them for aggressing against peaceful people, maybe they’d get the message they should use their discretion more often and focus their efforts only on violent crimes.

Kristolaitis has only been charged with “disorderly conduct” and surprisingly not charged with “resisting arrest”, so officers aren’t even trying to claim that, as they frequently do when they want to make the victim look bad. An arraignment is scheduled for March 1st at Keene District Court and Kristolaitis is talking to an attorney about the situation. Stay tuned to Free Keene for any updates.