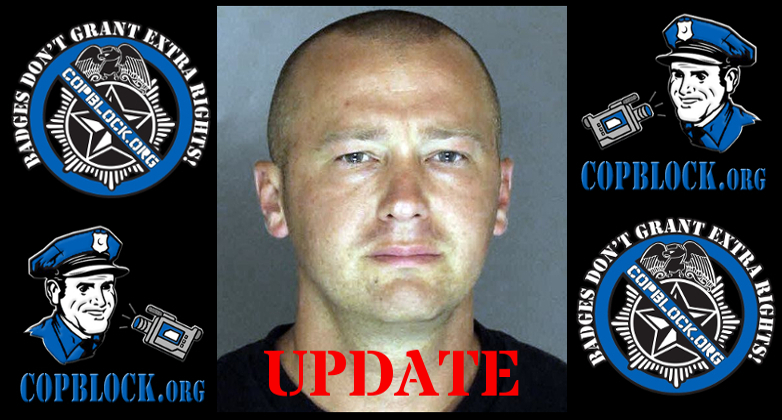 In July of last year, I posted about former Pennsylvania Officer of the Year Bryn Lindenmuth. As is common practice among “award winning” police officers, Officer Lindenmuth had just been arrested at the time. As is also very common among cops in general, the crime Lindenmuth was arrested for was domestic battery.

At the time of his arrest, Officer Lindenmuth’s wife, Kalina, characterized the abuse and mistreatment as “an ongoing pattern of violence that had happened many times before and not some momentary loss of temper.” And his four hour attack on her that day was not some minor verbal spat or “lover’s quarrel,” either.

As detailed in the YorkDispatch.com:

Kalina Lindenmuth returned home from a cookout about 10:45 p.m. Saturday, and was parked near her home. Bryn Lindenmuth drove by in his Jeep, got out, unlocked his wife’s car with spare keys and took her keys out of her car, according to documents.

When she went into the house, her husband continued to yell at her, taking her phone and looking through it, police said. Bryn Lindenmuth then allegedly ripped her tank top, ripped off her bra, scratched her and allegedly tore apart her sandals, documents state. He also allegedly ripped up photos of them together, police said.

Kalina Lindenmuth then sat on a recliner while Bryn Lindenmuth used her phone to call her sister, telling the sister to mind her own business and calling both women “pieces of sh—t,” according to police.

Police say Bryn Lindenmuth pushed over the recliner with his wife still in it and that when she tried to walk away, he blocked her and pushed her, then tried to throw her through the rear sliding-glass door.

Bryn Lindenmuth allegedly hoisted Kalina Lindenmuth over his shoulder, but she managed to get away and ran to get her phone. Bryn Lindenmuth got the phone first and put it in his pocket, police said, then picked her up again, trying to force her outside.

“Bryn used substantial force using his elbow and jammed it down hard on her shoulder in an attempt to knock her down,” documents state.

Kalina Lindenmuth tried to get back into the home to get her phone and wallet, but “Bryn kept blocking her path and grabbed her arms and started to force her backward to possibly fall down the steps,” documents state.

Kalina Lindenmuth was able to grab her flip-flops and run to a neighbor’s home, where she used their phone to call 911, police said. The entirety of the incident lasted from about 11 p.m. until 3 a.m., according to police.

While speaking with police, Kalina Lindenmuth said she was scared of what her husband might do after she called police, adding that he has many weapons in the house, documents state. The couple’s two children were not present during the incident, police said.

At the time of my original post, Officer Lindenmuth was on paid vacation while the Good Cops at the Southwestern Regional Police Department “investigated” the violent attack he had committed on his wife. I speculated on whether they would opt for a complete whitewash or gifting him with a plea bargain for some really minor charge with a half-hearted slap on the wrist as “punishment.”

Now six months later, it’s been officially announced that they decided to go for option number two. (To be fair though, the wrist slap was so weak that it might as well be considered a tie.) Lindenmuth was allowed to plea down to a charge of “harassment.” Conveniently enough, Southwestern Regional Police Chief Gregory M. Bean has now stated that that charge, which doesn’t even qualify as a misdemeanor, “simply doesn’t allow them” to fire him.

Not only did he receive no meaningful punishment whatsoever, but Officer Lindenmuth also will be reinstated and will be back out there heroically protecting people from violent criminals again later this month. They did make him do some counseling, though. It’s almost like they’re actively trying to prevent cops from being held accountable for their actions…