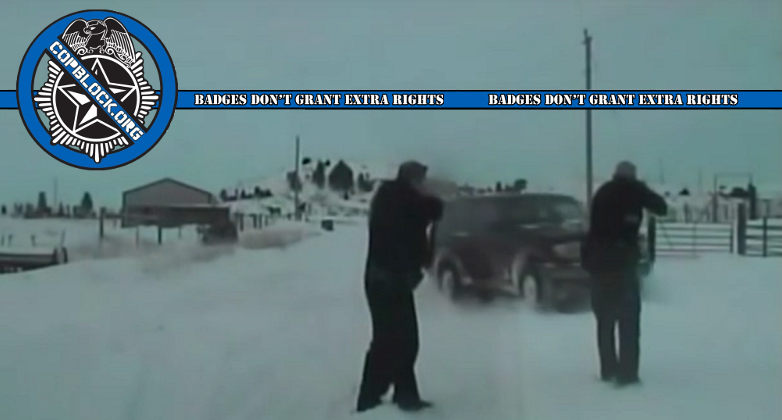 On Thursday, a judge in Montana ruled that two Yellowstone County Sheriff’s deputies could be held personally accountable in a lawsuit brought by the family of a man they shot in 2015. Judge Susan Watters ruled that Deputies Chris Rudolph and Jason Robinson had not acted reasonably when they killed Loren Simpson as he drove toward a roadblock they had set up. As a result, should Simpson’s family win their suit, the deputies will not be entitled to protections under the law and instead will be personally liable for damages awarded.

Rudolph and Robinson had used the old standby excuse of “I thought he was going to run into me with his truck” to try and justify their murderous actions. However, dashcam video (embedded below) showed that Simpson had actually veered off the road and into the ditch in an effort to avoid the police vehicles blocking the road. In addition, the deputies even admitted that they weren’t sure Simpson’s vehicle was the one they were looking for at the time.

Further testimony showed that the low visibility caused by darkness and the snowy conditions, along with potential noise from the vehicle itself and its heater may have prevented Simpson from seeing or hearing the deputies and the vehicles, which had no overhead lights on at the time, from a distance.

The judge ultimately ruled that there was no evidence to support the deputies’ contentions that Simpson was trying to hit them, nor was there any reason to believe he had even committed a crime. According to Judge Watters, even if they had possessed such evidence, the crime of burglary that they claim he was suspected of was so minor that the force used would have been excessive, regardless.

“The force used by the deputies was severe, the crime they suspected Simpson had committed was minor, the danger to the deputies was minimal, and the deputies could have used less intrusive means to affect the investigative stop,” said Watters in her judgment.

Rudolph and Robinson shot and killed Simpson on White Buffalo Trail Road in Huntley in January of 2015.

The former deputies were cleared of criminal wrongdoing at a coroner’s inquest in February of 2016.

Rudolph and Robinson claimed to believe Simpson was a suspect in a burglary and they believed he was driving a stolen vehicle.

The former deputies parked the patrol car in the street to block traffic from coming through and pointed their weapons at the oncoming vehicle.

The former deputies said they killed Simpson because they believed he was trying to run them over with the vehicle.

Dash-cam video from the patrol car shows Simpson driving the Explorer toward the deputies but it swerves into the ditch.

“The question that will never be answered is whether Simpson even knew the deputies were attempting to stop him,” said Watters in her judgment. “Prior to setting up a roadblock without even turning on the patrol car’s overhead lights, Robinson admitted to his supervising officer that he wasn’t “even 100% it [was the right] car.”

The former deputies fired at least 24 shots at Simpson, according to the judge’s review.

Watters added that it was possible Simpson could not hear the deputies’ commands because it was winter and he had the heat on in the vehicle.

She also noted that it was dusk and visibility would have been impaired.

Watters said in her judgment that not only was there no evidence to support Simpson’s intent to hit the deputies, but argued that there was no proof Simpson had committed any crime.

“A rational jury could find the deputies’ use of deadly force was unreasonable,” said Watters in her judgment.

Not surprisingly (because that’s what they are designed to do), a coroner’s inquest found Deputies Rudolph and Robinson were justified in executing Simpson.