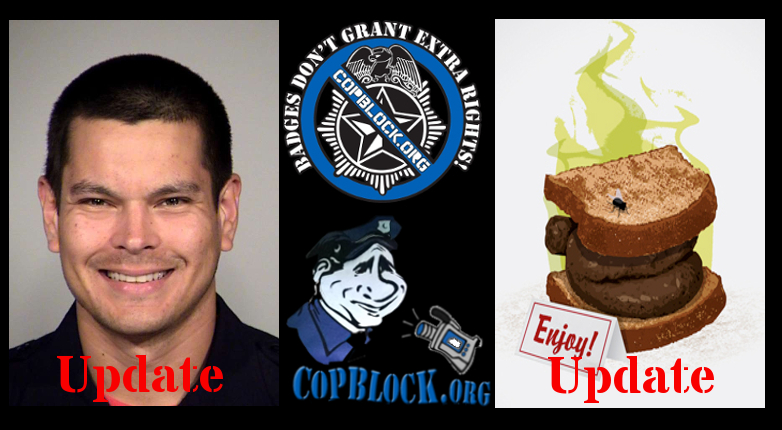 In November, I posted about San Antonio Police Officer Mathew Luckhurst who had tried to feed a sandwich filled with dog poop to a homeless man:

Luckhurst had bragged to another cop that he had placed feces inside bread and put it in a styrofoam container next to a sleeping homeless man, hoping he would eat it. That unnamed officer fortunately had some decency and told Officer Luckhurst to go back and throw the shit sandwich away. He then reported the incident to the San Antonio Police Dept.’s Internal Affairs Bureau in July.

Subsequently, the suspension was recommended by both a civilian review board and a review board comprising sworn officers. in October. After a meeting with Officer Luckhurst, San Antonio Police Chief William McManus upheld the suspension. Earlier today, both he and San Antonio Mayor Ivy Taylor released statements regarding Luckhurst’s behavior.

As I noted at the time, although it was reported that he had been fired, that was really a bit of a technicality because he actually has been “indefinitely suspended.” In reality, the intention is probably just to buy a little time until the publicity quiets down and then have the local police union play bad cop and file a dispute that ends up getting him his job back.

However, yesterday some new information emerged showing that this was not the only time that Officer Luckhurst’s feces fetish has gotten him into hot water with the SAPD. In fact, he seems to have been building on that as his go to prop for workplace pranks. And this time he even enlisted a sidekick.

In June, just a month after the incident with the sandwich, police say Luckhurst defecated in the women’s bathroom stall at SAPD’s Bike Patrol Office and spread a brown substance with the consistency of tapioca on the toilet seat, giving the appearance that there was feces on the seat.

Officer Steve Albart was also involved in the prank, according to the records. He was originally given an indefinite suspension, but Chief William McManus reduced it to 30 days without pay. Albart finished serving that suspension Jan. 19.

Unlike Officer Albart, Luckhurst’s suspension was not reduced and he received a second indefinite suspension. So, now Officer Luckhurst has been “fired” twice (although he’s apparently still officially on the roster and in the process of appealing both suspensions). Expect him back out there protecting and serving (shit) at some point in the near future.
690
SHARES
FacebookTwitterGoogleRedditTumblr
DiggLinkedinStumbleuponMailPrint