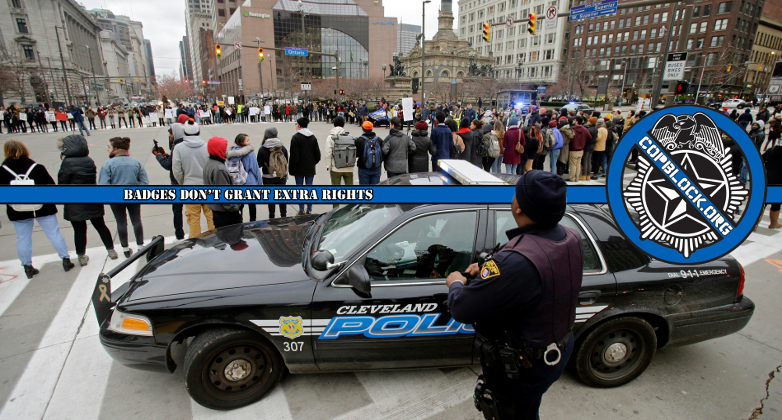 A member of the Cleveland Police Gang Unit, who was involved in a 2015 shooting of an unarmed man that the department initially lied about, was later himself busted for drugs. However, instead of going to jail, he’s been given a deal that will allow him to go to rehab instead of having his guilty plea count as a conviction.

In the shooting, for which a lawsuit is set to go to trial soon, Detective Jon Periandri claimed that the man he shot during a drug bust, Joevon Dawson, had gotten out of a car with a gun in his hand. The other five Good Cops at the scene backed up his story and one of them also moved a bullet casing to support the claim. Even Cleveland Police Chief Calvin Williams got in on the act, making a statement to the press at the scene that Dawson was armed when he was shot.

However, information later released as part of the lawsuit indicated that the only gun recovered at the scene had been stored within the center console area on the inside of the vehicle. Investigators from the Ohio Attorney General’s Office Bureau of Criminal Investigation concluded that the gun could not have been used by Dawson.

Meanwhile, even as he was in the process of arresting and shooting people for drug crimes he was simultaneously buying drugs by the handful. In fact, evidence showed that he literally ordered drugs while on duty as part of the narcotics squad. Incidentally, his taste for prescription pain killers and heroin were uncovered after a drug bust that included the Brooklyn, Ohio Law Director and the son of the mayor of Parma, Ohio.

Periandri would soon face criminal investigation for another incident that happened in the weeks before and after the shooting.

All three were arrested. A subsequent tip from a confidential police informant and a search of Yunis’ cellphone turned up hundreds of text messages with a number that was later traced to Periandri, according to court records.

The messages appeared to be “criminal in nature” and showed Periandri, a detective in charge of investigating and arresting drug dealers, repeatedly requesting to buy prescription painkillers and heroin off of Yunis, and even agreeing to act as a middleman for some drug deals, according to a search warrant affidavit obtained by cleveland.com in December 2015.

Dawson’s attorney entered the affidavit as evidence in the federal lawsuit on Thursday.

Messages seized from May 23, 2015 showed that Periandri ordered drugs while he working during protests in Cleveland that followed the acquittal of Cleveland police officer Michael Brelo on manslaughter charges in the 2012 killing of an unarmed couple. He also used a shorthand for what the affidavit describes as a racial slur to describe the protesters.

Cleveland police’s internal affairs unit launched an investigation and, that same month, obtained a warrant to collect a hair sample from Periandri and have it tested for drugs.

But before they could execute the warrant, Periandri took a medical leave of absence and checked himself into a drug rehabilitation center in California, internal investigators wrote in the affidavit.

A May 13, 2016 email between from Cleveland police commander Brian Heffernan to Williams, the head of internal affairs Lt. Monroe Goins and another Cleveland police officer indicated that Periandri was in talks with Assistant Cuyahoga County Prosecutor Jim Gutierrez.

The two agreed that Periandri would be charged by information and plead guilty to a felony drug possession charge at a June 7 court hearing. He would receive treatment in lieu of conviction, the email says.

Periandri would then serve a year’s probation, and the charge would be dropped from his record if he successfully completed treatment. In exchange, Periandri agreed to give up his certification to be a police officer.

But that court hearing never happened.

Prosecutors did not charge Periandri until Thursday, more than eight months after the original offer, according to court records. And the information was not delivered to the clerk’s office until about 1:30 p.m. Monday, after reporters began asking the prosecutor’s office about Periandri’s case.

The information, signed by Gutierrez, Periandri and Periandri’s attorney, Robert Dixon, is stamped Jan. 19. A note stuck on the outside of Periandri’s file says the information was “back-dated” to Jan. 19.

Kathleen Caffrey, a spokeswoman for the prosecutor’s office, said on Monday that Periandri had been charged by information and pleaded guilty in June.

After a reporter asked for a copy of the information and more information about the court hearing on Tuesday, she called to say that she had misinterpreted a conversation with Gutierrez and that no June agreement was reached.

Periandri was allowed to retire from the department for medical reasons on Aug. 9, 2016, Williams said.

Also, when reporters began asking about the drug “conviction” as a result of discovery information from the lawsuit, a spokesman for the prosecutor’s office explained that the records of it had never been entered into the Cuyahoga County Common Pleas Court’s public docket due to an “IT issue.” #SeemsLegit