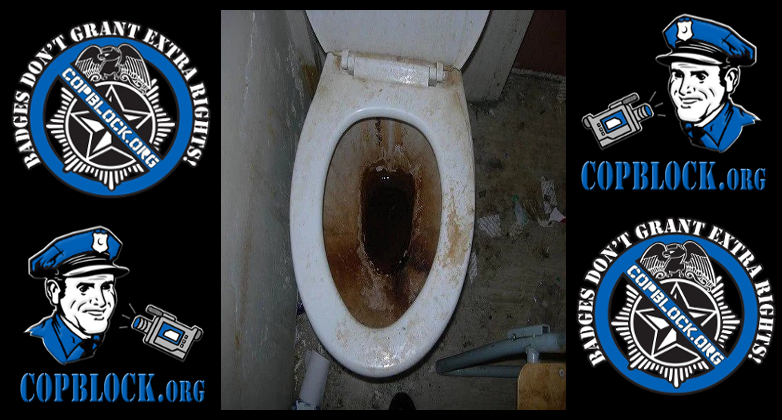 The following post was shared with the CopBlock Network by Natalie Jacoby, via the CopBlock.org Submissions Page.

On Feb. 20, 2016, I was arrested for a public drunkenness in the back parking lot at Breakers Bar in Ellport, Pa, of which I am guilty. At the time of my arrest Officer Matthew Kennedy was extremely rude and forceful in cuffing me as the picture shows. I do also have more photos of other bruises and scratches left on my arms and legs by this officer.

That Monday the 22nd, my mother and I went to the magistrate so I could pay this charge off in full. To our surprise, a later charge was added stating that I had urinated and defecated in the cell I was being kept in. We were appalled to learn of this later charge. A few days later, about two months before I even had my hearing, I was sent a bill for $369.08 from the Borough of Ellwood City Public Works Supervisor Randy Gatto for the clean up of this cell!

When I was in the cell I had to beg for about 30 minutes for water and toilet paper. When this was brought to me I went to use the toilet when I noticed the disgusting condition of the area. There was old caked on urine and feces covering the toilet and the floor surrounding the toilet. Now, I’m sure it would be obvious to us all what old caked on waste looks like as opposed to something that was supposedly just done. I WAS going to urinate in the styrofoam cup the water was brought to me in and then dump it into the toilet because I refused to touch that toilet. However, I could not urinate so I tossed the cup aside.

Believe me, I know how bad this must have looked. I took the toilet paper I had pulled from the roll and used it to cover the toilet area so I would not have to look at this filth. The entire night I was in the cell I loudly complained about the old urine and feces covering the area. I did become vulgar about the incident when I was in the cell stating that “someone could seriously gets sick from this shit, you need to clean this shit up, someone is going to get Hepatitis from this!” I did request to at least be put in a clean cell-no answer.

Upon my release a different officer was working. This officer was also extremely rude. He asked me “what did you do piss all over the place?!” I found this absolutely insulting and told him I did not but judging by the state of that cell maybe I should have. And that if he didn’t believe me to check the tape as I was being recorded the entire time I was there. I asked if I could use a phone to call my mom to pick me up and I was told to “get the hell out of here. We don’t even have to let you go!”

My address is in Ellwood City, however I do not live in town. I live on the Ellwood/Fombell line a few miles away and would have had to walk down a very busy four lane highway to get home. I stopped at a gas station in town and was able to use their phone. When my mom picked me up on the side of the road, I immediately started to tell her what happened and showed her the black, sticky filth and grime all over me. When I got home I washed my hands twice and took a shower.

I did file a police complaint form and a 7 1/2 page report of what happened that night, this information was sent certified with return receipts to the mayor of Ellwood City, Anthony Court, the Magistrate Jerry Cartwright Jr. and the chief of police, William Betz. None of this did me any good.

I am on SSI because of my bipolar, so I unfortunately could not afford an attorney, I did contact two different Family Legal Services and public defenders offices and was advised against getting an attorney even if I could afford one. They told me it would be difficult to find someone that would take this case because it was my word against a police officer’s and because “they work with these officers on a daily basis.”

The day of my hearing came, April 4, 2016. In court, Officer Kennedy entered as evidence to the judge the police complaint form I had filled out against him. As I already stated the judge was also sent one of these in the letters I had previously mailed certified. Judge Cartwright thought this police complaint report was something they had written up against me. He did not even know what it was. This tells me either he did not read the information I had sent or more likely he was not taking this false charge seriously.

Officer Kennedy brought with him another officer who was there that night, Officer Disher, as a witness. There were times during this hearing when Kennedy again blatantly lied and where these officers contradicted each other . Kennedy stated when I supposedly urinated on the floor I was standing on the bed. Disher stated that I was between the bed and the toilet. When Officer Disher was asked if he would like to specifically describe what happened in his own words he replied “no I just agree with what he said”, referring to Kennedy.

We all know that if I had had a witness and they would have replied that way their testimony would have been immediately thrown out. Judge Cartwright asked me “why would a highly trained police officer lie?” At the time, I was not sure how to respond to this. I cannot answer for someone else. However, after thinking about this question I know why he lied. He lied for the same reason any person lies…to protect himself. Either that disgusting mess came from me or it was there before I was put in that cell.

I feel like this officer may have felt stuck. Either he press a false charge and blame me or the Ellwood City Police Dept. would be in quite a bit of trouble for allowing their cells to remain covered in peoples waste. Kennedy stated in court that he was worried about my safety and that was why I was arrested, however at the time of my arrest he refused to answer me when I asked why I was being arrested. Also, if he really was concerned for my safety, I would have been able to use a phone upon my release to get a ride home and I never would have been locked in a cell covered in filth and waste.

So now I am stuck paying on fines for over $600 for something I would never do. I have also been back in therapy because of all the emotional distress this officer has caused me. I have also learned of other people, including one girl who is a friend of my sisters, who were locked up right after I was and they have also said those cells are disgusting, covered in other people’s waste! This entire experience changed me and unfortunately I have become extremely angry and bitter towards the police since then. Obviously when you do not have a badge your words do not matter.