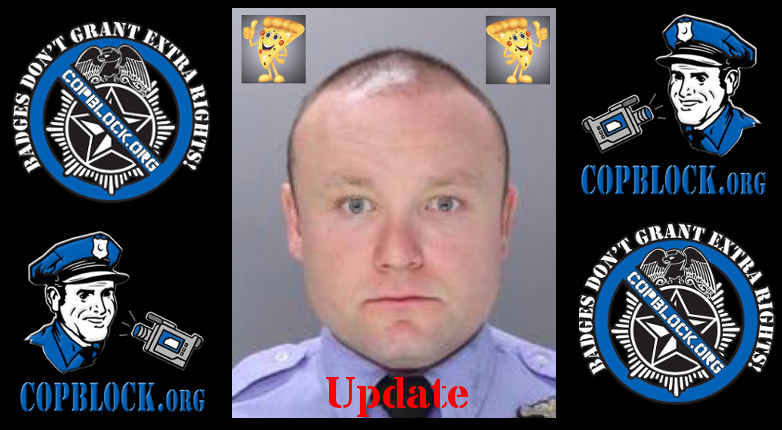 Last June, I posted on the Copblock Network about Philadelphia Police Officer Michael Winkler, who was facing charges after he robbed a construction contractor that he had hired. At the time, the details were a little sparse, but the basics of the case were that Winkler had “lured” two workers to the location of the robbery with promises of pizza and additional money. Then, once they were there he had assaulted them and stolen all of the cash they had on them at the time. It was also reported that he had stiffed them on money for previous work.

For the most part that’s still an accurate run down of the situation. However, during his trial, some additional details came out. Apparently, he had (according to his victims) misrepresented the amount of work that needed to be done on a new house he had recently purchased and then hired them to work on. As a result, the main victim, Nathaniel Carter, had called him to try and renegotiate the deal.

Officer Winkler didn’t like the sudden proposal for change of terms. So, he assaulted Carter, knocked him to the ground, demanded he pay him back the original $600 he had paid him, and then rifled through his pockets taking all the cash he had on him. As originally reported, that amounted to $38. (Sorta reminiscent of LVMPD Detective Michael Kitchen’s situation a couple years back.)

Things went a little further than that, though. Winkler also took Carter’s wallet, grabbed his debit card from it, illegally searched his car, and insisted that he was going to have one of the other workers at the job site go to an ATM and retrieve the rest of the money he had paid him. Then, Winkler called 911 and asked for some local cops to come and arrest Carter for “scamming” him. Of course, since he was on-duty and driving an undercover police car the whole time, he also called his supervisor and asked to be placed on vacation status.

Upon arrival, two officers found two contractors, one seated in a Nissan Maxima and one on the ground nearby with change around him.

The two contractors told police they were hired by Winkler on May 3 to do work on his newly purchased home on Newportville Road. One of the contractors began the work for $600 cash and soon realized there was more work than initially agreed upon.

Before police arrived on May 5, Winkler allegedly called the contractor found by officers seated on the ground near the Maxima and requested he return to the Newportville Road home to renegotiate the price of the work. Winker then became angry with the man once he arrived and held his forearm to his neck, forced him to the ground and put his knee into his side. Winkler then told him he had to give him his money back, according to court papers.

The contractor told Winkler he put the money on his bank card. Winkler then demanded the contractor’s bank card and threatened to send him to jail if he didn’t turn the card over, police allege.

While holding down the contractor, Winkler allegedly said he was going to have a worker remove the money from the man’s account and then proceeded to go through the man’s pockets despite requests to call 9-1-1, court papers state.

The other contractor was seated in the Maxima during the incident and was confronted when Winkler went over to search the glove box of the car and had a construction manager search the vehicle’s trunk, police said.

Winkler then picked up a wallet from the car and removed the cash and the owner’s driver’s license. He then called his police supervisor and asked to be put on vacation status before dialing Bucks County 9-1-1, police said.

Philadelphia authorities said in a statement to LevittownNow.com that Winkler is accused of taking $38 during the robbery.

(Bristol Township Detective Greg) Beidler, who has worked in the Bristol Township Police Department for 27 years, wrote in the affidavit that Winkler told responding officers he was an on-duty police officer and wanted one of the contractors arrested for theft of services and fraud.

Unfortunately for Officer Winkler, things didn’t quite unfold the way he had (presumably) expected once Bristol Township Police arrived. Instead, Winkler ended up being arrested himself and was charged with two counts of felony robbery and two misdemeanor counts of theft, theft by extortion, receiving stolen property, false imprisonment and several other related offenses. As noted earlier, he still managed to get his Policeman’s Discount and ended up being sentenced to five years probation after pleading guilty to just one count of theft and three counts of disorderly conduct in a Bucks County Court.

That of course, eliminates those pesky felonies he had been facing originally. It’s not really addressed in the Philly.com article, but I’m gonna go out on a limb and guess that he’ll also probably have to wait until the probation ends before he can go and get hired back as a cop at another department.