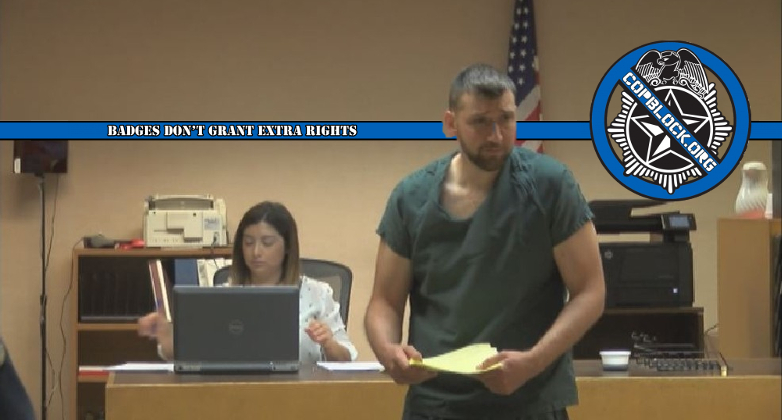 Officer Travis Disney of the Wapato Police Department has been sentenced to “time served,” plus one year of probation for sexually assaulting a woman. (According to a different account, that woman was his wife) Disney had attacked the woman after an argument reportedly “got out of control.” He pled guilty to third degree rape after originally being charged with second degree rape and false imprisonment.

That time he supposedly served amounts to the eight and a half months he spent awaiting trial. At best, it’s a technicality. He was released without bail, but forced to wear a electronic monitoring anklet to ensure he didn’t get within 250 feet of his victim’s house. So, that means his “confinement” consisted of essentially having a restraining order filed against him and not being able to go within a short distance of her house.

Via the Yakima Herald:

Yakima County sheriff’s deputies went to the home around 9 a.m. after a 911 call was received. No one was speaking into the phone, but dispatcher reported hearing a man in the background say “Why did you call?” before the call was terminated, according to a probable-cause affidavit.

A followup call by dispatchers went to voice mail, but a short time later a man called dispatchers and told them no one there had called 911, the affidavit said.

Deputies said when they went to the house a woman told them an argument with Disney got “out of control” and that he held her down and sexually assaulted her. During the assault, the woman had scratched and bit Disney, the affidavit said.

Disney was not on duty at the time, but deputies said he used his department-issued laptop computer to see that the 911 call had gone through, and tried to use makeup to cover up his injuries.

Disney was arrested on suspicion of second-degree rape and unlawful imprisonment.

On Monday,  Superior Court Judge David Elofson and prosecutors agreed with members of the county’s pretrial release program that Disney should be released without bail.

So in reality, his only punishment will be one year of probation. However, his attorney,  Ulvar Klein, said that “he’s paying a heavy price,” by not being able to be a cop anymore (even though he has “landed on his feet again” at a new, unspecified job). It’s not clear from the article if he will be able to wear his cape anymore, but presumably now that he officially isn’t allowed to be a Police Hero they will confiscate that from him.