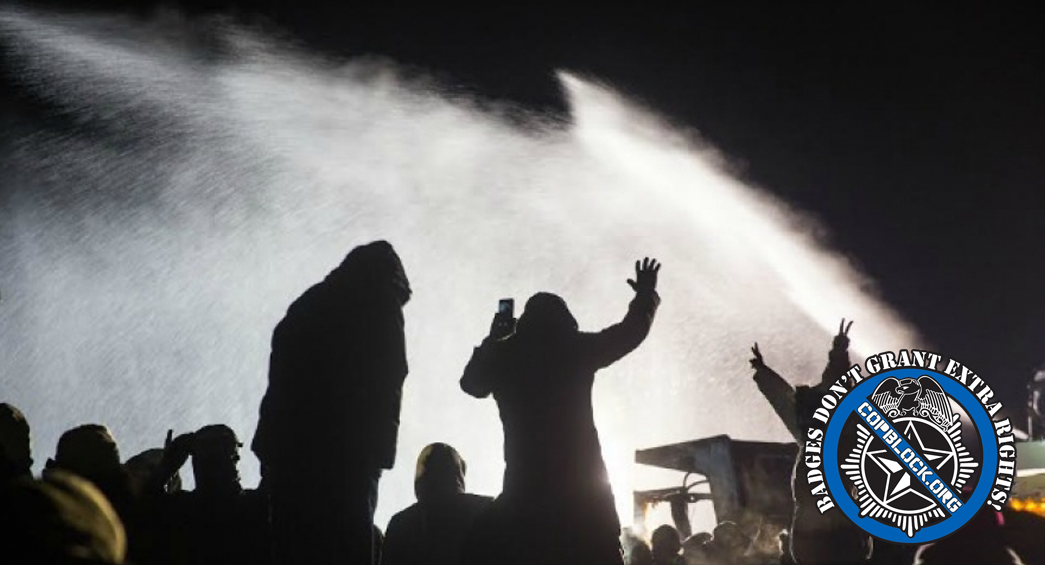 This article was originally published on the Pontiac Tribune under the title “Militarized Authorities Raid DAPL Camp, Start Fires, Sport Trump Stickers” by the same author.

With a government under Trump approving continued construction at Standing Rock, protesters are holding firm. For that, police have let loose a new wave of violence, and militarized tactics. Reports now allege authorities–conducting a raid on water protector camps–left burning tipis in their wake. Such accounts, although not entirely untrue, are more than they appear to be.

Protests against the Dakota Access Pipeline (DAPL) have endured for over a year at Standing Rock, North Dakota. Residents, as well as dozens of other Native American tribes, have joined in solidarity in an effort to stop the build.

North Dakota authorities have subjected protesters, water protectors, and journalists to extremely harsh forms of militarized violence. Police units have utilized rubber bullets, tear gas, pepper spray, water cannons, grenade weapons, and all manner of surveillance against activists. Many have been wounded, including a young woman who nearly lost her arm.

Another contractor wielding an AR-15 was apprehended by activists and later identified. Witnesses feel he was attempting to infiltrate the group and instigate a response from police. Blackwater mercenary-linked surveillance companies were also confirmed as having largely handled DAPL surveillance.

Personnel from eight other states, including Wisconsin, were also deployed to Standing Rock to assist. These deployments were requested under an EMAC (Emergency Management Assistance Compact). EMAC’s are intended for natural disasters, not massive political containment.

Several camps have been established by water protectors and activists in recent months. While these have come under assault before, this most recent operation is particularly jarring. Authorities targeted a recently settled camp “Last Child”, where construction is expected to resume. It’s occupants lit traditional sacred fires as symbols of their resolve to continue pushing back.

According to TeleSUR, bulldozers and sound cannons were allegedly utilized against Last Child’s occupants. These are, however, unconfirmed and unsubstantiated by footage live streamed to the web. Reports of sound cannons have surfaced at Standing Rock before, and are subject to debate.

Police then reportedly extinguished the fires, and carried out some 76 arrests. Live streamed footage made it’s way online some hours ago, sourcing back to this page. Its article claimed, “some of the live streaming of these incidents was blocked”. This has been reported several times before and has been investigated but numerous organizations.

Clips were linked to the page, showing large military-style vehicles mobilizing on a distant road. Campers then began drumming, and singing songs as the cameraman narrates. Police had apparently not only put out sacred fires, but set up positions on main access roads. Police vehicles–appearing more like armored troop carriers–then u-turned to re-advanced on the camp.

As police approached, protesters noticed a new fire burning in the distance. One of these police vehicles had a Trump sticker on its back windshield. This was all captured on video which is spreading online as you read.

It’s also not become unusual for these interactions at Standing Rock to have planes buzzing above for some unknown purpose. “The police started this fire”, Shiyé Bidzííl narrates, “and we don’t know why”. This occurs as the Trump-Pence bumper-sticker-clad vehicle rolls past alongside military armor. “You can still see there’s a plane, flying on top, or a helicopter.” Bidzííl’s Facebook page is littered with media, including pictures and video’s, from Standing Rock.

Another clip shows what appears to be a line of militarized officers, riot police, and unmarked vehicles forming on distant hills. The narrator expresses uncertainty as to whether two of his associates had been arrested. Unmarked red vans were also filmed entering and exiting camps, allegedly filled with arrested protesters. Later live streams confirmed that roads had been blocked off surrounding the camp.

The narrator did downplay some claims circulating the web on the incident. Whereas military vehicles were present, fires started, and protesters arrested, the main camp went untouched. He also stated that although he’d heard reports of unusual tech malfunctions, he hadn’t experienced any.

In recent hours, other media outlets questioned claims of burning tipis, including Snopes. Their piece examines a picture which has become synonymous with the story. The outlet was able to connect that picture with an HBO feature “Bury My Heart At Wounded Knee.” Although the Snopes piece examined the picture, it didn’t examine the live streamed footage. Despite this picture being debunked, it remains unclear what the police burned on the hill.

The final clip concluded with the narrator affirming that the camp which was stormed was worth it. It would appear that some questioned what the point of the razed camp was. The narrator affirmed their purpose to protect “treaty land”; proclaiming new camps will be built.

It’s unclear what exactly the protesters are being charged with, or where they’re being taken. Given the presence of both militarized and unmarked vehicles, it’s a wonder if any are outsourced. Standing Rock certainly isn’t over, and violence isn’t de-escalating.

Instead, its lands more resemble a war zone with clear embattlements by the day. Trump’s volatile administration, obviously backed by at least some police at DAPL, only makes the prospects darker. That goes for both those holding their ground, and those already taken inside the red vans.