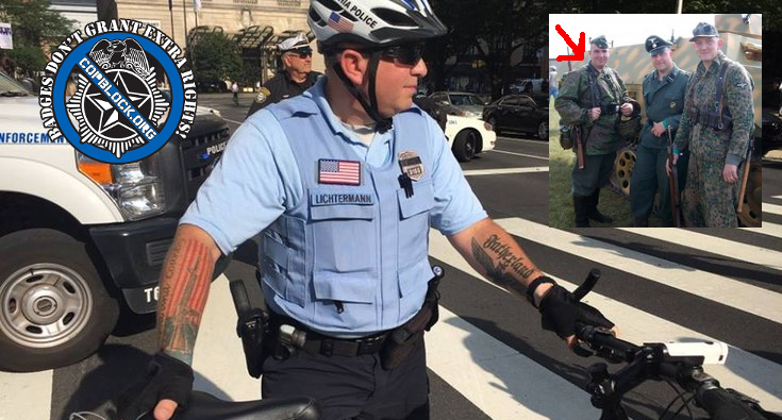 Earlier this week, an internal affairs “investigation” determined that an officer had not violated Philadelphia Police Department policy by having a Nazi tattoo on his arm. Officer Ian Hans Lichterman had been photographed in July during the Democratic National Convention openly displaying the tattoo of a Nazi era eagle with “Fatherland” written above it.

Not surprisingly, that caused a bit of a controversy. People aren’t really used to cops just coming right out and openly acknowledging their allegiance to Nazism and/or membership in the KKK. They generally try to keep that shit on the downlow. Of course, in keeping with that tradition, the Philadelphia Police Internal Affairs Bureau didn’t just announce that it’s okay to openly be a Nazi. Instead, they based their endorsement of Officer Lichterman’s tattoo on the fact that the department didn’t have any policy specifically addressing tattoos.

Via the Philly Voice:

The Internal Affairs investigation cleared Lichterman of any violations, closing the case in December, police said. They did not respond to follow-up questions inquiring whether any specific determinations were made about the tattoos.

Meanwhile, nearly five months after the controversy erupted, police brass have yet to deliver a promised tattoo policy for its ranks.

Photos of the tattoos, posted to Facebook by Evan Parish Matthews, showed a German eagle beneath the word “Fatherland” on Lichterman’s left arm. The post indicated the photos were taken on July 26, 2016 at Philadelphia’s #BlackResistanceMarch during the Democratic National Convention.

The eagle appears to resemble one depicted in the Nazi Party’s partieadler emblem, a symbol included in the Anti-Defamation League’s “Hate Symbols Database.”

That symbol features an eagle with outstretched wings, its head pointed left, and holding a wreath containing a swastika. The photos of Lichterman’s tattoos did not show whether his eagle was perched on a swastika.

Mayor Jim Kenney, who previously called the tattoos “disturbing” and “incredibly offensive,” released a statement that voiced the same reaction. But without an existing tattoo policy,  Kenney said police could not dismiss Lichterman.

Of course, you could make a really shitty argument (that nobody on this planet actually believes) that having a Nazi tattoo isn’t an indicator that you would act with bias when performing your job as a cop. You could even go into total denial and claim that a Nazi tattoo doesn’t mean you’re racist or a member of Neo-Nazi hate groups. Or you could also try for the low hanging fruit and claim that the eagle is just a traditional symbol of his heritage (you’re actually not really even trying at this point), even though the traditional German eagle looks nothing like the one used for Nazi era symbols.

All those ridiculous arguments would be exposed as nonsense though, if that same police officer with the Nazi tattoo had already previously been exposed as a member of racist skinhead groups, and someone who liked to dress up as an actual Nazi in his off time, though.

During a series of hacks against Neo-Nazi websites that took place between 2010 and 2012, emails and other identifying information belonging to members were leaked. By some amazing coincidence, an email address belonging to Officer Lichterman and an address matching the house he lives in with his wife (who is also a Philadelphia police officer), along with some photos of him in full Nazi uniform while taking part in war re-enactments, just happened to be included in those leaks:

…during a period from 2010-2012 there were several successful hacks of Neo-Nazi websites that led to the identification of dozens of Neo-Nazis and White Nationalists. One of the more interesting cases was that of Ian Hans Lichterman. Lichterman was listed as a member of Blood and Honour, an international network of Neo-Nazi organizations started by Ian Stuart Donaldson, the lead singer of Skrewdriver. Upon some investigating, it was discovered that Lichterman was also a Philly PD officer who had even recently been commended at a crime stoppers awards ceremony. The e-mailed listed alongside his name with the leak, philly3155@yahoo.com, seemed to refer to Lichterman’s badge number, 3155. The address that was also leaked with the name and e-mail is owned by Lichterman and his wife, fellow Philly PD officer Susan Bevidas.

Shortly after the hack, Lichterman appeared to leave the Philly PD and to be working as a private security contractor (mercenary) in the middle east, presumably using his connections from his time as a Marine. However, members of the media have noted that during this time Lichterman was still on Philly PD payrolls. So either the move was a ruse because people had been calling Philly PD asking about him and his affiliations… or he was kept on the books while working abroad for some reason. Recently, at the Philly Coalition for REAL Justice’s march during the DNC, someone noticed that one of the bike cops working the event had some shady tattoos. That cop has been identified as Ian Lichterman, back on duty in Philly.

So yeah, not only has the Philadelphia Police Department known they had an openly Nazi police officer among their ranks for years, they seem to be pretty okay with that.