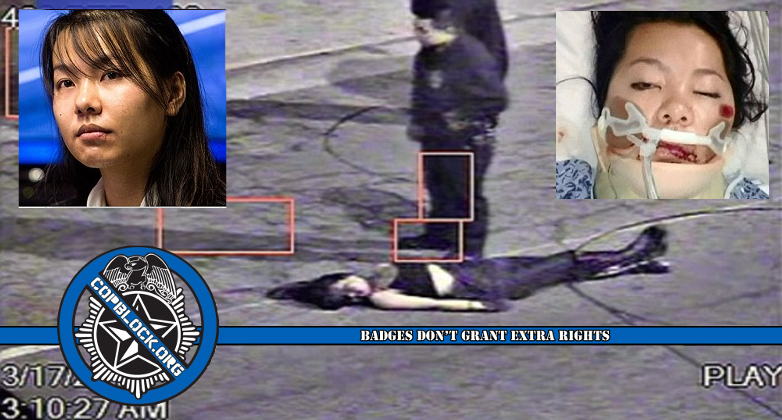 California taxpayers will be forced to pay a woman that was seriously injured after falling out of an LAPD squad car in 2013 $3.5 million. (Video embedded below.) Kim Nguyen, who was being arrested on charges of being drunk in public, was handcuffed at the time she fell out of the car. She also was not seat-belted in and the door which she fell out of was not locked properly.

More importantly, she maintains that the reason she fell out of the car was that she was attempting to get away from one of the two Los Angeles Police Department officers that was in the back seat with her and had been trying to sexually assault her. The fact that she CCTV video from a nearby business shows that her skirt was raised above her waist at the time she was ejected from the vehicle, as well as the fact that the two officers who arrested her chose not two arrest two male companions that were also drunk at the time bolsters her version of events.

Officers David Shin and Jin Oh arrested Nguyen for public intoxication after they saw her run across the street about 3 a.m. on March 17, 2013. At the time, Nguyen was a graduate student in her last semester at Loyola Marymount University’s MBA program.

Nguyen was handcuffed and put in the back seat of a squad car off Sixth Street between Oxford and Serrano avenues, according to her court papers, which state that she “was not seatbelted into the car and the manual door lock was not engaged.”

The officers chose not to arrest a male companion who also was drunk, according to Nguyen’s lawyers, who also alleged that one of the officers got into the back seat with their client and inappropriately touched her.

Nguyen huddled against one of the patrol car doors to protect herself and minutes later fell out of the vehicle as it was being driven east on Olympic Boulevard at about 30 mph, according to her lawyers’ court papers, which say she fell face-first onto the pavement, causing injuries to her brain, face, head and teeth.

A building security camera captured the aftermath after Nguyen was ejected, according to her attorneys’ court papers, which say that one of the officers was “nonchalantly standing over plaintiff who lies bloodied, with her face swollen, in the middle of the street.”

Nguyen was hospitalized for 17 days and underwent “extensive and painful surgeries,” her court papers state.

This also does not represent the only recent allegations of rape against officers from the LAPD.