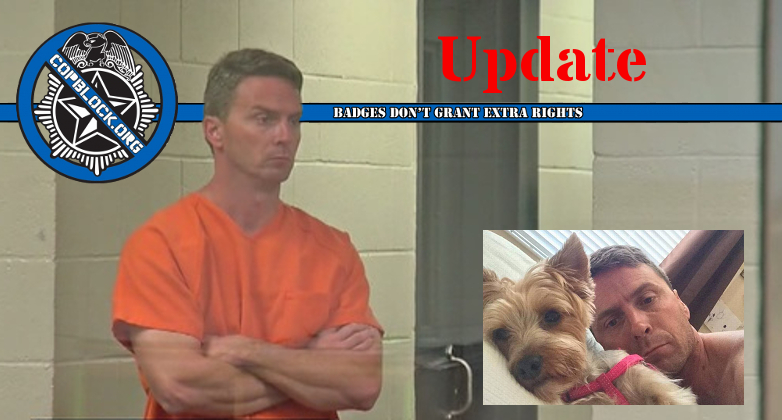 Last week, I posted on the CopBlock Network about Frankie Bybee, a Sarasota County Sheriff’s deputy who extorted cash from an elderly woman then tried to murder her in a staged suicide attempt once she filed a complaint against him. In the process, he also sold her dog on Craigslist, after charging her $1,000 to care for it while she was in the hospital.

Yesterday, an Internal Affairs report in the case was released. Not only did it contain new details concerning the original charges, including surveillance video of Bybee using the victim’s ATM card to withdraw money, but it also included some new revelations about “business deals” he was involved in.

Via ABC Action News in Tampa:

According to the report, a woman, Elinor Jarvis, came forward and told detectives that they were “involved in an ongoing ‘business deal” for several years that included Dep. Bybee being financially compensated for engaging in sexual acts with her.”

The report said he met her years ago in a hotel room near Boston, Massachusetts and was paid $5,000 for their “initial sexual encounter.”

The report also said that Bybee would record himself in a sex act in his patrol vehicle while on duty and send the video to her via an app called “Tango” and then she would transfer $500 into his PayPal account.

The total payout, according to law enforcement, for these acts was more than $100,000.

The sheriff said Bybee’s actions were first brought to their attention on Jan. 9. That is when Marcia Sohl filed a complaint against then deputy Bybee.

Bybee, according to Knight, responded to a call for service at Sohl’s home on Oct. 21. He befriended Sohl and began to take advantage of her. Investigators released video they say shows Bybee withdrawing money from ATM’s across Sarasota using Sohl’s stolen debit card. In one transaction, Bybe is in uniform.

On Tuesday, Bybee was charged with ten new counts of Criminal Use of Information that involves several unauthorized uses of the victim’s credit card.

Also, according to the report, just prior to the murder attempt Bybee had used the original victim, email account to send a message to her doctor pretending to be her and expressing “suicidal implications.” As a result, the victim was involuntarily committed for a mental health evaluation (commonly referred to as a “Baker Act” hold). It was later determined that Deputy Bybee’s IP address was used to send the email as part of his plot to make it appear she had committed suicide.