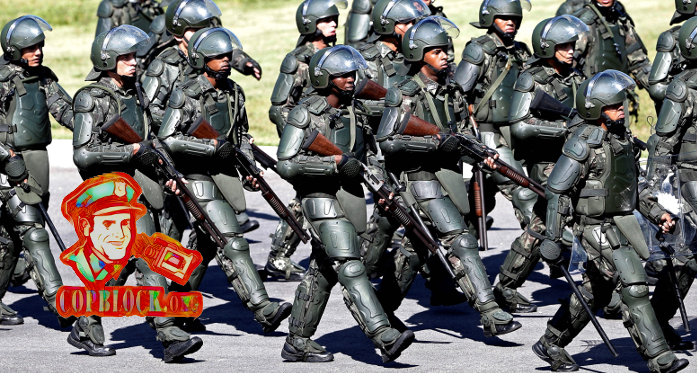 While mayhem and violence have swept across several Brazilian cities, some are using this tragedy as proof that abolishing police would never work.

The current situation in several Brazilian cities is being compared to those awful propaganda films The Purge by police supporter pundits and rabid cop apologists looking for an easy ideological victory. They aren’t going to get it here.

What is happening in Brazil is the culmination of years of social discord, political upheaval, economic hardship and state violence. Brazilian police have been at the heart of this escalation of violence. Their heavy handed militant tactics for dealing with dissenters has been getting more and more bloody for years now. They have created a cycle of destructive retaliatory behaviors which are now playing out to their logical conclusion as Brazilian cops now just sit on the sidelines and watch what they created.

The calls you see here at Cop Block for the abolition of police ask for a peaceful transition with innovative community-based planning. Where police have only hammers, they see only nails. What is being proposed here is taking away hammers from people who misuse them and giving communities and individuals a full tool bag from which to solve a number of very different kinds of problems without using compulsive force.

That is not at all the same as the situation in Brazil.

That situation is the result of escalating authoritarianism, increased government control and violence by the enforcement agencies. A situation which is happening here in America right now.

When the state continues to take more power for itself and more away from the people, and police become the standing army in charge of transferring that power, discord increases until the whole thing collapses under the weight of its excess. That is what is happening in Brazil and that is what could happen here.

Abolishing police is the solution, not the thing to be feared. You poor things have it all mixed around.