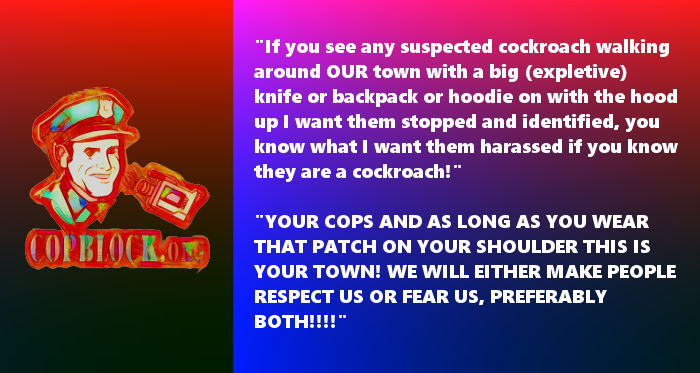 Former Elkins, West Virginia police chief Craig Cross is under fire by local prosecutors over a memo in which he asks for heavy-handed profiling of ‘cockroaches’.

The institution of policing is in many ways also an ideology and culture. Within it there are many nearly monolithic internal and external beliefs about policing. The greatest of them is the myth that police are the great brave protectors of society. This is the delusion foisted upon them by their masters in the ruling classes in order that they can escape the logical consequences of their inhumane actions.

With a monopoly on violence and sense of heroic superiority, the inflated cartoon archetype police and their supporters carry must then conjure an equally absurd ‘enemy’ to keep the narrative afloat. The ‘enemy’ in chief Cross’ memo, the cartoonish villain he summons to justify his role as gang leader, are the ‘cockroaches’.

Here is the memo, retrieved from WDTV:

“If you see any suspected cockroach walking around OUR town with a big (expletive) knife or backpack or hoodie on with the hood up I want them stopped and identified, you know what I want them harassed if you know they are a cockroach!”

“YOUR COPS AND AS LONG AS YOU WEAR THAT PATCH ON YOUR SHOULDER THIS IS YOUR TOWN! WE WILL EITHER MAKE PEOPLE RESPECT US OR FEAR US, PREFERABLY BOTH!!!!”

So who are these cockroaches? Cross seems to have been referring to some specific residential areas. As you can guess it wasn’t the seven bedroom houses where white collar criminals sleep peacefully after long days of fleecing humanity out of pride and greed. He is referring to poor people.

Of course that is likely to include a high percentage of minorities, a majority in fact, but the real divide here is about socio-economic status. As the ruling classes channel more human wealth into their bank accounts, the vacuum of poverty in the lower classes leads to cycles of crime which police prey on. They have to control us so we don’t spill over into the cozy neighborhoods where the corporate criminals sleep snugly.

Cockroaches is an apt term, in that this is how police see themselves. They think they are the Great Exterminators cleansing the world of pests. In all reality they are the conduit by which the ruling class creates poverty and crime to benefit itself. They are not ridding society of the scum, they have become the scum in order to create more. They and their jails and prisons are the Great Womb.

Forget the cockroaches, we need to go for the nest – ABOLISH THE POLICE!