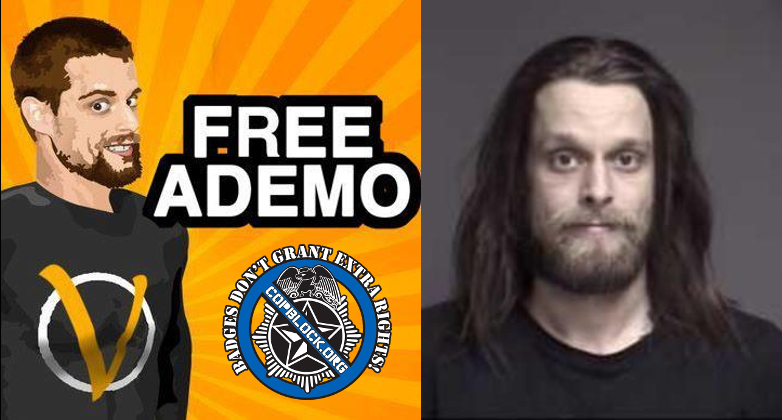 Cop Block founder Ademo Freeman has been arrested while driving in Lebanon, Ohio by the Ohio State Police. Despite Ademo not consenting to a search, Trooper Jeffrey Martin claimed that because he allegedly smelled the odor of cannabis, that he had probable cause to search.

Ademo was placed into a cruiser, then the trooper(s) broke open a lock on a suitcase. They asked him how much marijuana he had, so presumably that’s what they found inside – at this point we can’t know for sure. Ademo was placed under arrest and taken to the Warren County Jail, all while asking Trooper Martin his thoughts about victimless crimes. All of this is heard on a 40+ minute video recorded and live streamed on Ademo’s cell phone to his facebook page.

I’ve taken the time to edit the video down to less than 15 minutes as well as boost the audio levels. I included portions that I couldn’t make out what was being said, in case you can. Here’s the edited video, which does not have long periods of silence and noise of cars passing:

According to Ademo’s jail record, he’s expected to be arraigned at the Warren County Municipal Court in front of judge Robert S. Fischer on Tuesday, February 14th. He’s facing three charges including “trafficking in drugs“, a third degree felony, and two counts of “possession of drugs“, one a third degree and the other a fifth degree felony. Ohio actually has their criminal court case records online and you can see Ademo’s case record here. (The jail record says the other count of possession is class three, but the court record says class five.) He’s also been charged with a burnt-out tail light.

Ohio state statutes say that third degree possession or trafficking of marijuana is between 1,000 and 20,000 grams. Fifth degree possession is between 200 and 1,000 grams. Both are felony level charges, and he could be facing as many as eleven years in prison. There is a fundraiser to assist with legal fees that you can help with here.

Should you wish to call the jail to let them know you are paying attention, you can call 513-695-1287 and choose extension 8 to reach a corrections officer. Remember Ademo’s legal name is Adam Mueller. If you’d like to contact the Warren court prosecutor to request they drop the charges, you can reach them at 603-695-1000, Mon-Fri 8:30a-4:30p Eastern. According to the Warren Municipal Court website, the prosecutor is named Cynthia Ellison. Though, there’s another website that says the county prosecutor is named David P Fornshell at 513-695-1325. It’s too late on Friday at the time of this writing to determine which is going to be handling the case.

Stay tuned here to Cop Block or to Ademo’s other blog, Free Keene, for the latest.