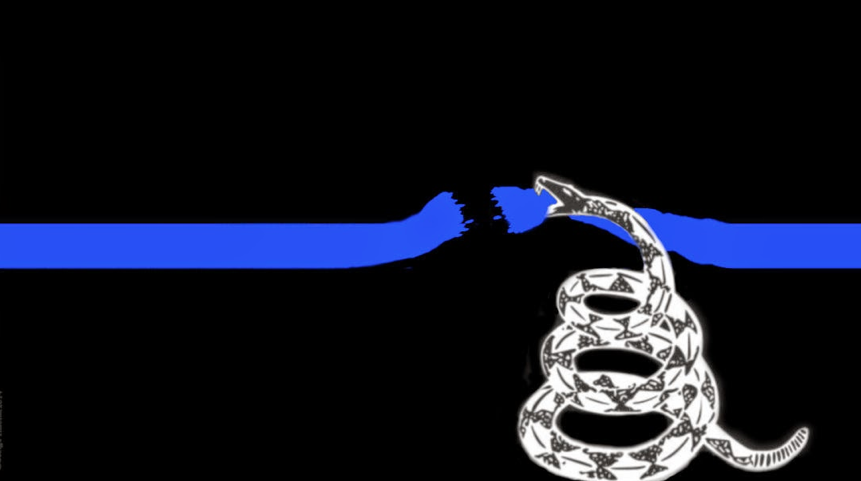 This article was originally published on Greed Media by the same author.

It’s becoming difficult to ignore a brazenly open politicization of American policing. This phenomenon excludes the various protests, militarized responses to those protests, and debate choking media both online and on-air. It’s entirely different, and generally not practiced by a majority of police agencies. “We back the badge”, thin blue line, and Blue Lives Matter are charged with polarization, no doubt. They’re inherently different, however, from open endorsements of political parties, and the taunting of an abandoned public.

Milwaukee, Wisconsin–like many other cities around the country–isn’t a stranger to this tension. Riots blazed, and military planes patrolled overhead, just months ago. And, despite the efforts of residents to either move on or improve the situation, not everyone’s on board.

Shortly after the riots, I personally noticed a sharp increase of “We Back The Badge” signs in my area. Wauwatosa is a nearby mostly white suburb, and home to two police shootings since 2015. Both killings, one still under investigation, were committed by the same officer. Rumors of Black Lives Matter’s signs being destroyed by neighbors only highlighted the atmosphere. It’s a locomotion that eventually collided with Sheriff David Clarke’s divisive, fiery rhetoric.

Clarke, a vocal right-wing advocate, has been the subject of numerous controversies recently. Given that fact, he found it smart to turn his department’s official Facebook into a billboard for buffoonery.

Pontiac Tribune recently covered a Milwaukee Sheriff meme which offended, and intimidated many in the city. Since then, the page hasn’t ceased publishing similar material. All and all, residents can’t tell if posts are authoritarian ramblings or a troll’s prank. Unfortunately, the latter is too damn unlikely and good to be true.

During Trump’s campaign, Clarke emerged as one of the most vocal advocates of the controversial then-front-runner. Ignoring recorded violence at his rally’s, Clarke praised Trump as “the law and order” candidate. Milwaukee’s sheriff then went further, stating “it’s pitchforks and torches time in America!” Such rhetoric is frightening because there are likely people out there willing to interpret those as commands. Why is a police figure advocating for chaos?

Proving this isn’t isolated, just the other night, Pontiac tribune writers caught wind of another militarized raid at Standing Rock. Despite reports claiming tipis were burned, this couldn’t be confirmed. Footage was captured of the raid, during which authorities did set unidentified fires. A pick-up truck hauling a trailer was among the many police vehicles stalking protester camps that day. In its back windshield, footage revealed was a Trump 2016 bumper sticker.

Granted, this one vehicle does not represent the whole ground force assaulting activists. It does, however, suggest a wider tread of certain police agencies becoming talking heads themselves. That’s scary as hell since those talking heads have weapons and an inclination to use force. Police institutions are sworn to uphold the Constitution and defend the public. Instead, the politicized skeletal framework of these institutions is revealed by the day.

We must now consider what further evolutions may soon occur. Police are not warriors, and they shouldn’t be used for ideological control either. Party line’s in some of these agencies are already clear, and their capabilities tested. Many of these entities are already involved in various forms of intelligence-gathering operations. How far are we from police literally enforcing ideology? How far outside the scope of reality is the possibility of police “favoring” some political acts, or protests, over others?

That’s not conspiracy. Cops are already in school’s talking to teenagers about searches. Many of these agencies, particularly David Clarke’s department, have ceased to represent the people. Instead, they operate outside public oversight, doing whatever they please.

Where is far enough? When do police entities who aren’t in this game of us-them thinking speak up? The world is too volatile to play these games of agitating the public and provoking outrage. Even people who normally “back the badge” can’t support the incarnation of politicized policing, and ideological intimidation.