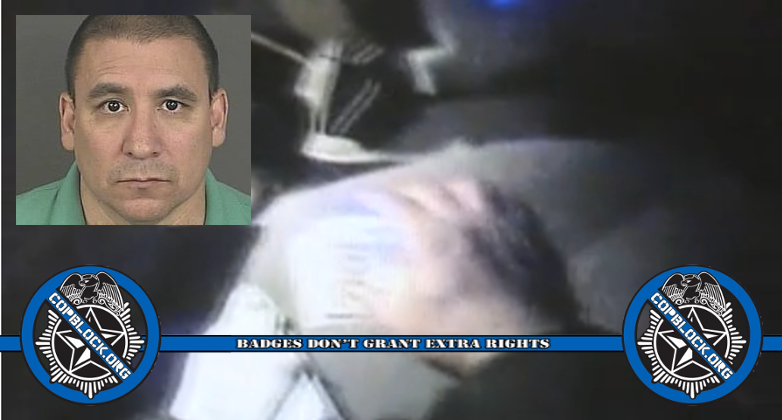 Information included in the following post was shared with the CopBlock Network anonymously, via the CopBlock.org Submissions Page.

In October of last year, CopBlock Network Contributor Asa J  posted about Officer Julian Archuleta of the Denver Police Department, who apparently forgot he was wearing a body camera and recorded himself stealing $1,200 from the car of a suspect. The car he had taken the money from was involved in a roll over accident during a high speed chase following an incident in which the owner and a passenger had fired shots at two police vehicles.

A detective that reviewed the video as part of the investigation later noticed that the video showed a $100 bill, but the money that had been turned in as evidence did not include any $100 dollar bills.

On Oct. 7, Archuleta, a patrol officer in northwest Denver, assisted in the investigation after two suspects in a vehicle fired shots in the direction of two police vehicles parked at a 7-Eleven store. A short pursuit ensued, investigators say, ending with the suspects’ vehicle rolling over near the intersection of East 50th Avenue and Washington Street. The driver took off on foot and a passenger was left unconscious in the vehicle, police said.

Archuleta’s body camera recorded as he searched a suspect’s clothing and took pictures of the wrecked car, according to his arrest affidavit.

In the footage, Archuleta picked up a stack of cash with a $100 bill on top. He removed that bill, and the footage showed him shuffling papers and cash in his patrol car, the affidavit said.

A detective who later reviewed the body camera footage noticed the $100 bill and questioned why only $118 had been logged into evidence. Archuleta later produced $1,200 and told another detective that it must have fallen into his bag, the affidavit said.

His excuse that it had somehow fallen into his “war bag” unbeknownst to him for some odd reason didn’t work. Archuleta was originally charged with a felony for tampering with physical evidence and two misdemeanors of first-degree official misconduct and theft. In addition, as a result of his evidence tampering and contamination of the scene, the two suspects were never prosecuted (way to have your Brothas’ backs).

Of course, rather than facing any sort of real consequences for his actions, he was instead gifted with a plea deal that allowed him to cop to (you saw what I did there) misdemeanors with the felony being dropped. After entering his guilty plea on Monday, Officer Archuleta was only sentenced to 180 days of probation. He was also allowed to resign instead of being fired.

Obviously, it’ll be a long, hard six months before he can go out and get hired at another police department.