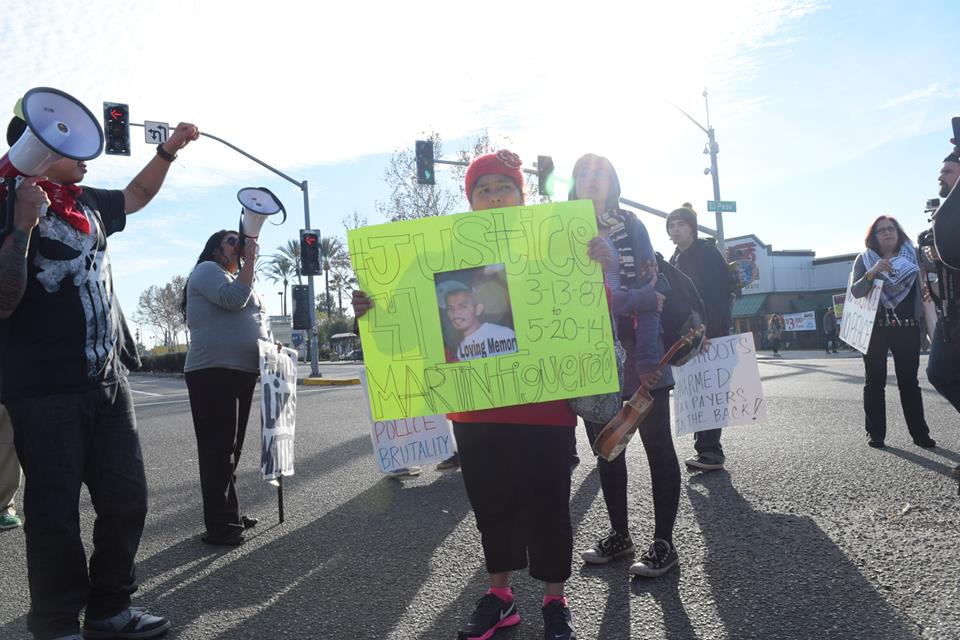 Three years ago Martin Figueroa was fatally shot four times by Robert Alvarez and Mikal Clement, both employed by the Fresno Police Department – once in the armpit and three times in the back – he was also mauled by a police K9. Figueroa was killed after the police claim he threatened them with a steak knife in a bedroom of his mothers house.

The family filed a civil rights lawsuit for wrongful death now three years later a federal judge in Fresno, CA has ruled that the case should be decided by a jury. The lawsuit which list six separate complaints including, Fourth Amendment claims for using excessive force both in deploying a police dog and in shooting Martin Figueroa and Fourteenth Amendment claim for loss of familial companionship brought by Aurora Figueroa. Wrongful death, negligence, battery and negligent infliction of emotional distress are also included in the lawsuit.

Bruce Praet, an attorney for the city and the two officers, attempted to have the Figueroa case dismissed VIA summary judgment, arguing that the fatal shooting was justified, given that Figueroa was armed with a steak knife. However the motion was dismissed due to the fact that the family has a legitimate dispute as to whether or not Martin was actually armed with a knife.

Bruce Praet, an attorney for the city and the two officers, tried to get the Figueroa lawsuit dismissed through summary judgment, arguing that the fatal shooting was justified, given that Figueroa was armed with a steak knife.

San Francisco lawyers Arturo J. González, Alexandria Amezcua and Christopher Wiener, who represent the Figueroas, contend the officers shot an unarmed Figueroa while he was being restrained by a police dog. They also said when officers arrived, Figueroa was in the home alone and not posing a threat to anyone.

In court papers, the family’s lawyers say Figueroa’s fingerprints were not on the knife and laboratory test results show no conclusive proof that Figueroa even touched the knife.

“A reasonable jury could easily find that the absence of any DNA or fingerprints on a small steak knife found on the floor of a cluttered bedroom was strong evidence the knife had not been wielded by a violent perpetrator, but instead merely happened to be in the room,” Drozd’s ruling says.

Because Figueroa was shot four times, Drozd writes: “A rational jury could find that the force used by the officers was excessive even if the decedent had a knife in his hand.”

The Figueroa family’s lawyers contend that police acted with “deliberate indifference” by recklessly provoking a potential violent confrontation. In other words, by sending in a 60- to 65-pound dog, the defendants knew it would attack the 5-foot-8, 132-pound Figueroa.

Police, however, contend the decision to enter the home was based on concerns that police calls were backing up, “rather than the exigency of the situation,” court records say. In his ruling, Drozd says a jury could conclude that “the decision to escalate the potentially volatile situation simply in order to be freed to attend other calls was a deliberate indifferent action by the officers that ‘shocks the conscience.’ ”

Police Chief Jerry Dyer and the City Attorney’s Office said in an email: “A motion for summary judgment is brought in a case to narrow the scope of the issues raised in the complaint prior to trial. The judge ruled there were facts in this case that needed to be determined by a jury.”

Dyer added: “We believe the officers involved in this matter acted with extreme patience. Additionally, we found the force used by officers to be objectively reasonable, within legal standards and department policy. We look forward to aggressively defending this matter in court.”

The officers involved admitted that their actions were influenced by a heavy call volume and not by any exigent circumstances. When the officers did enter the residence they found Martin in a rear bedroom; a K9 police dog biting on his left hand a supposed knife in his right hand. Officers claim to have ordered him to drop the weapon but instead he raised it above his head. According to court record Martin was 5’8 and weighed 132 pounds and the police K9 a Belgian Malinois weighed 65 pounds. So was Martin actively trying to attack the officers or was he restrained by the police K9?

At the time of his death police chief Jerry Dyer condemned Martin for having a history of violence and previous trouble with the law but his family says he he was attending church regularly, enrolled in Fresno City College to learn mechanics and staying out of trouble. A date has not been set for this case to go to trial. Since November, the city has settled two such lawsuits for nearly $2.9 million. At least four other lawsuits are pending.

Protests broke out in Fresno, CA as a response to the murder. I was there with CopBlock editor Dylan Donnelly; in fact it was this police shooting and the killing of Miguel Moreno Torres that inspired the chalking of the police memorial.