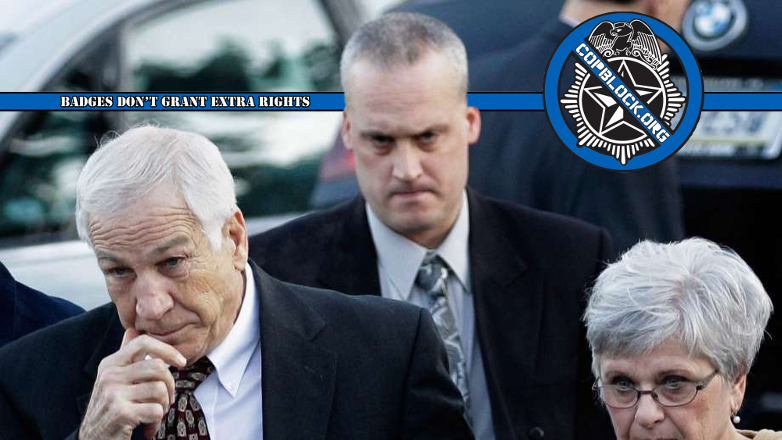 Jeffrey Sandusky has been arrested on 14 charges relating to attempted child sex abuse. He is currently being held on $200,000 bail at a Pennsylvania jail. Sandusky has also been suspended (without pay) from his job as a corrections officer at Rockview State Prison, located near State College, PA.

The Sandusky name is, of course, better known for Jeffrey’s infamous father. Former Penn State assistant coach Jerry Sandusky is currently in prison after having been convicted on 45 counts of child molestation in 2012.

The charges against Jeffrey Sandusky involve two underage daughters of a girlfriend he was living with at the time. Sandusky was implicated in text messages in which he solicited nude photos and oral sex from a girl who was 15 years old at the time and assured her “it’s not weird because he studied medicine.”In addition, the girl testified that Sandusky had spied on her while she was showering through a crack in the door.

He also reportedly asked the girl’s older sister for nude photos back in 2013, when she was 16 years old. His excuse for wanting the nude photos was because the girls already had nude photos on the internet and he needed more of them in order to remove them. Another bad cover story was that he needed them for “role playing.”

The pervert solicited the young girls for raunchy photos while their mother slept or was away from the residence, according the criminal report filed against him. Sandusky lived with the girls for five years before he was kicked out of the home in November, and was arrested at his mother Dottie’s home on February 13.

His disturbing alleged abuse was only reported to the state police after his ex’s youngest daughter sent screenshots of his messages to her father just before Thanksgiving.

When questioned, she told police that he asked her for photos while she was getting ready for school in the morning and that he asked her to “erase all the texts” so that “none of this ‘s*t’ gets mentioned to anyone or seen by anyone.” He then allegedly asked her for more photos in different scenarios, which she declined to send.

He responded that they should talk, to which she retorted: “we don’t need to talk and we aren’t going to. You did what you did and I’m not going to give you a chance to try and justify it. You literally tried to guilt me into doing it and you even told me specifically what I ‘needed’ to do. You know who does that? Rapists and abusers, not [redacted] who care about their [redacted]. I don’t know how many times I need to tell you no and stop before you get it.”

The victim claimed she only received disturbing texts from him once, and that he told her lewd photos of herself already existed online. She “knew his talk was bulls**t,” and acknowledged that he “shouldn’t be asking stuff like that.”

The victim’s mother also told police that Sandusky “advised her that he was trying to help her [redacted] by getting [redacted] off the Internet and needed [redacted] to do it and to ‘role play.’” Similarly, she denied any photos existed.

Then, the victim reported that, “recently, while she was in the shower, she could hear Jeffrey Sandusky walking down the hallway and heard footsteps stop as if someone [was] looking into the bathroom. [She] advised that there is a crack near the door and you can see into the bathroom if you are trying to look into it.”

She claimed she did not report the incident to her mom because Sandusky “makes [her] mother happy,” but she did report the abuse to her older sister. Her sister then came forward with her own allegations dating back to 2013.

“Victim #2 then advised [redacted] victim #1 that he had done the same type of thing several years back to [redacted] when he asked [redacted],” the complaint read. “Victim #1 advised that [redacted] was told by Jeffrey that he would never do this again and promised not to do anything like this to [redacted].”