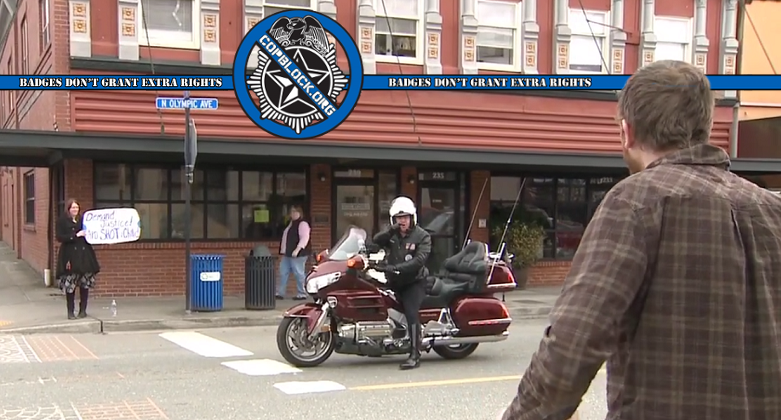 A 17 year old girl was shot early Wednesday morning in Arlington, WA. Investigators said the shooting occurred on N. Olympic Ave., when officers arrived at the scene of a disturbance between a male and a female. After separating the individuals, the girl who had a knife was then shot by the police. The incident sparked local protests against police brutality.

During the street action, a fat tub of lard wearing a police uniform and riding a motorcycle decided he needed to straighten out the protesters and proceeded to give them a lesson in the correct way to deal with a police officer. (Video embedded below.)

“It doesn’t matter, you don’t bring a knife to a gunfight” the pig squealed, followed by “If you’ve ever been in the military you would understand.” However, the girl who was shot by police was only 17 years old and probably still in high school. The idea that she had ever been in the military is completely illogical. Also, his statement implies that she came looking for a fight with the police

He continues to scream at the protesters until one of them confronts him and demands he leaves. Throughout his temper tantrum the pig provided many tells to the mindset of the thin blue line. “You do what a cop tells you” implying that no matter what a cop tells you to do, you do it.

He then calls the teenage victim of police “stupid.”

You don’t play with the police, She was stupid and she got herself shot because didn’t do what the cops told her to do.

When you dissect the rhetoric of this officer in regards to police interactions, it sounds more like he thinks of the residents of his town as hostages rather than the good people forced to pay his salary. He, like so many other members of the thin blue line, have forgotten their place in society. Nationalism along with propaganda and legislation have elevated members of the enforcement class to standing greater than the average member of society; granting them extra rights as they are so willing demonstrate both in and out of the courtroom.