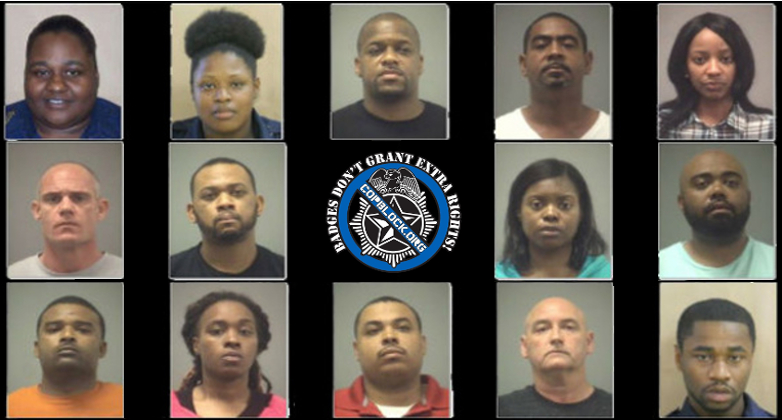 Earlier this week, it was announced that after a two year long drug sting involving the FBI a total of fourteen members of law enforcement have been charged with drug crimes, including eleven within the state of North Carolina. According to WRAL-TV, all of the arrestees from North Carolina have confessed since being arrested. It wasn’t clear if that was part of a plea deal or if they simply chose to confess (my money is on door #1).

The arrests for charges related to cocaine and heroin included eight current or former police officers, three correctional officers, two Virginia prison employees, and one 911 dispatcher. The dispatcher, as well as all eight of the law enforcement  officers except one work or had worked for the Northampton County (NC) Sheriff’s Office. That includes five current and two former NCSO deputies.

Thomas Walker, the U.S. attorney for the Eastern District, said multiple people were arrested in a major sting of cocaine and heroin operations. Those arrested include five current members of the Northampton County sheriff’s office.

They were charged with trafficking cocaine and heroin up and down the I-95 corridor.

“They all gave some sort of confession,” a prosecutor told the judge, according to the TV station. “Each of these defendants admitted to their involvement.”

Nine of the officers were not granted bail on Wednesday because the judge said he needed more time to review the case, according to WRAL.

FBI Agent John Strong, who said he and the other agents involved were shocked (I tellya!) by the involvement of police officers, characterized it as “a breach of the public’s trust” in which those officers used their positions “to line their own pockets.”

Another guy who is shocked (I tellya!) is Northhampton County Sheriff Jack Smith, who saw roughly 15% of his 35 deputy department marched away in handcuffs, as a result of the case. He agreed with Agent Strong that this type of thing just cannot be tolerated, especially from members of law enforcement, stating:

For the record, guess who is not surprised at all by this and won’t be in any way surprised when they all get light sentences and possibly even just probation. (I’m talking about me, in case that isn’t really obvious.)