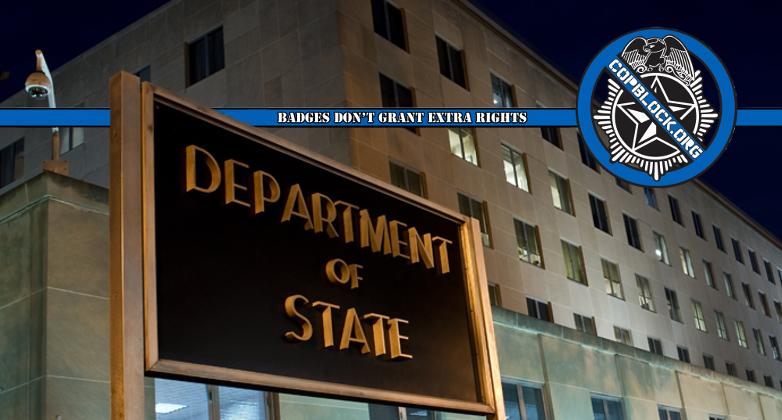 The following post was shared with the CopBlock Network by Daniel Bruno, via the CopBlock.org Submissions Page.

Within the post, Bruno describes a situation he says he is involved with, in which the US State Department has refused to renew his passport therby preventing him from returning to the United States. According to Bruno, that is despite him being a natural born citizen (from New York) and him having a valid birth certificate to show that.

I have so much to say that I don’t know where to begin. So much has happened that it can be surreal and overwhelming to talk about and to hear about it, too. I have been through much more than most Americans can imagine. I guess I will start by saying that I was born in Manhattan. In fact, in Donald Trump’s neighborhood (although he is originally from Queens).

I have a birth certificate identical to his (you can find his online).

I’m in a bitter dispute with the State Dept. over my right to a passport. They say Americans have no such right, what we have is a possible entitlement (their words), which I interpret to mean a privilege, like a driver’s license.

In May of 2014, I walked into the US Embassy in Buenos Aires with my perfectly valid US passport that was due to expire in six months. I filled out the renewal forms, paid the fees, was interviewed and dismissed by Vice Consul Creaghe. I never had a US passport again because they would not renew it.

There is, of course, much more to this story, including recent developments since Jan. 20, but the bottom line is that according to them, Americans have no right to a passport, no right to a nationality document and no right to return to the US…and I know this is illegal.

BTW, let me mention that I’m not wanted for a crime, back taxes, child support, etc. Just yesterday, I had another meeting/argument inside the embassy, and I told Holly Wilkerson I will force them to change their attitude towards Americans if it’s the last thing I do. I have told them in person that I can not imagine that Russia, China, Iran, or Cuba would have so much contempt for their own citizens.

So, we have the State Dept. refusing to accept the very passports it has issued to me in the past, as well as my authenticated New York birth certificate, for the purpose of renewing my passport. Yesterday, Holly Wilkerson, a woman at the embassy who has earned my scorn, confirmed this.

To me, this means that in theory, the State Department, accountable to no one but itself, is now deciding, at random and at will, who is an American.

I think Americans need to know.

I am actively seeking constitutional and civil rights lawyers who want to help me defend the rights of all of us.

I am available to help CopBlock and Ademo.