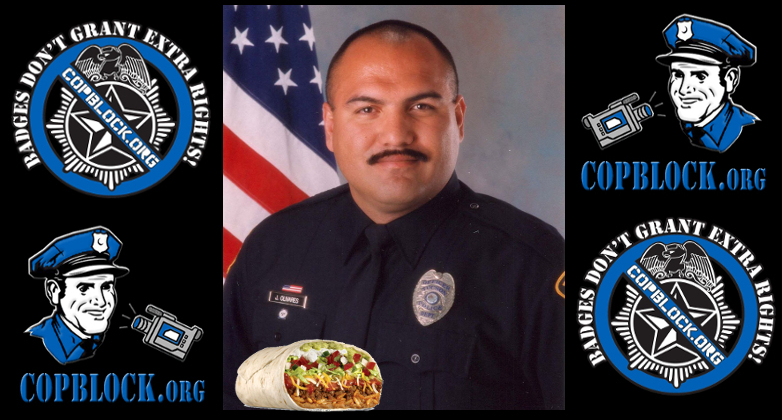 Last year, Officer Jose Olivares of the Tucson Police Department was fired after he was caught stealing a burrito from a local Mexican food restaurant the previous October. While the “Great Burrito Heist of 2015” isn’t exactly the crime of the century, it’s certainly something people that are paid to arrest other people for stealing stuff shouldn’t be doing themselves. So, he was fired from that position.

However, last week it was announced that the feel good story of 2016, where an internal investigation actually resulted in the Good Cops holding a Bad Apple accountable for his actions, has hit a snag. After an appeal, the Arizona Peace Officer Standards and Training Board has reinstated Officer Olivares and ruled that the firing was too harsh of a punishment. Instead he was retroactively suspended for 80 days and had his law enforcement certification suspended for three weeks, once again retroactively.

The Arizona Peace Officer Standards and Training Board accepted an agreement with Jose Olivares on Wednesday, and issued a retroactive suspension of his state certification, according to AZPOST documents.

Olivares was fired from the Tucson Police Department last February after he failed to pay for a burrito during an October 2015 visit to Viva Burrito, according to AZPOST documents.

The day after the incident, one of Viva Burrito’s employees told a police lieutenant what had happened, leading to a department investigation.

Olivares told investigators he forgot to pay, but security footage from the restaurant showed him reaching toward his pocket at least four different times, but never producing any payment, AZPOST documents show.

The investigation determined Olivares committed theft while in uniform and on duty, and he was fired.
Olivares appealed his termination with the city’s Civil Service Commission, which ruled there wasn’t just cause for the type of discipline imposed.

He was reinstated to the department after serving an 80-hour suspension, city records show.

His suspension with AZPOST was considered served between Feb. 26 and March 16, 2016, according to AZPOST documents.

All of which, of course, means that he is eligible for back pay for all the time he missed during his initial firing. So, in essence he got a one year paid vacation as “punishment” for stealing something that he easily could have paid for if he had wanted to. That’ll show ’em!