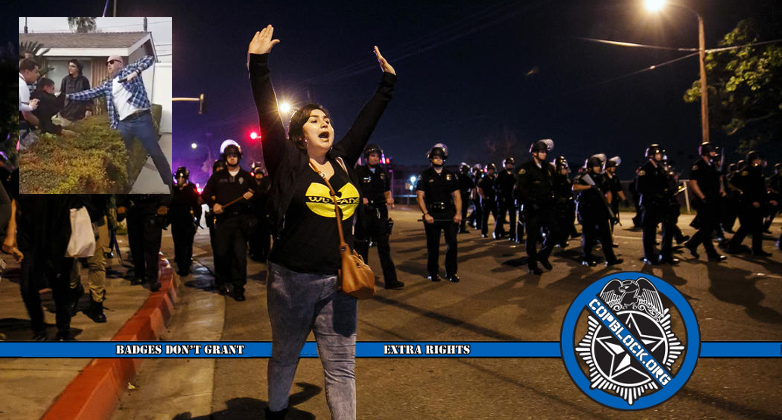 A dispute on Tuesday that apparently started when off-duty cop Kevin J. Ferguson became angry at a group of teens whom he had previously told to stay off his lawn has since escalated into full protests in and around Anaheim, California. That initial confrontation involving junior high school students (video embedded below) eventually culminated with that off-duty LAPD officer pulling out his gun as other students attempted to push him off a student, who has since been identified as Christian Dorscht. Dorscht, who is fourteen years old, was reportedly verbally defending a female student that the officer had cursed at and possibly also physically grabbed.

Shortly after he had pulled his gun out the officer accidentally discharged the weapon. Although, no-one was hit by that bullet, for obvious reasons, it created a panic amongst the teens, most of whom immediately ran away. Dorscht was handcuffed and taken away by on-duty cops that arrived soon after. He was, however, released the next day after being charged with battery and making criminal threats. An unnamed 15 year old was arrested for undisclosed charges, as well.

One of the contentions from the LAPD is that the officer involved thought he heard Dorscht say, “I’m going to shoot you,” which is what prompted him to pull his gun. The boys parents dispute that account and maintain that their son had said, “I’m going to sue you.” Dorscht’s parents and his stepfather, who is also a cop, have stated that they in fact do intend to sue over the incident.

Meanwhile, hundreds of people took to the streets last night and into the early hours of this morning in response once the video was made public on social media. As many as 300 people protested the officer’s actions and demanded that he be arrested. Those being interviewed by a local news station expressed anger that a grown man would feel the need to fight with children over them walking on a lawn and especially that he would pull his gun against junior high students.

Eventually, those protests relocated to in front of the officer’s home. The protests got decidedly more rowdy at that point, with some people pounding on his garage door and yelling chants such as “No justice – no peace,” “Killer cops, off our streets!” “Don’t shoot our kids!” and someone painting “Fuck Pigs” on a garage door. Within an hour or so, police in riot gear arrived and stood between the crowd and the officer’s house, prompting them to move down the street away from the house. According to police, 24 people, including six underage kids were arrested for misdemeanors including failure to disperse, resisting arrest, and battery on a peace officer during the protests.

Below are Videos and Social Media Posts of the Protests

Live pictures from #SKYFOX of protests in Anaheim over off duty LAPD officer who fired a shot in confrontation with teen @FOXLA pic.twitter.com/FNS5MYjMgT