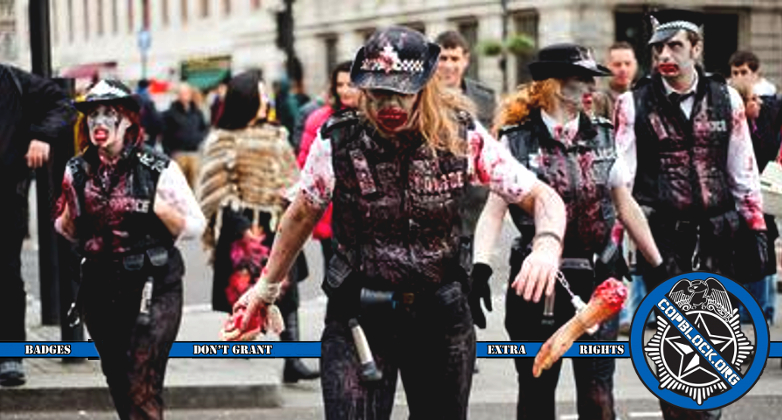 Say what you want about Potter’s choice of subject matter on this particular post, but I personally think this is a pretty valid concern these days. I’ll just have to agree to disagree with anyone that thinks this is a question that should not be asked. It’s too late once the zombies have taken to the streets to come up with an attack plan.

How Norfolk Constabulary would respond to a zombie outbreak was the subject of a Freedom of Information Act (FOIA) request by myself.

However my request to see how the police would tackle a hungry mob of zombies eating their way through the county’s population was rejected.

While it may seem a brain dead request, I was not happy when the police said his plea was “vexatious”, so he fleshed out why he felt it was in the public interest.

I said: “It does in fact have a serious purpose because whilst I do accept that the possibility is remote, there is a possibility that zombies may attack the County of Norfolk.

I added: “In such an event it is inevitable that these officers will be called to dispatch the living dead by members of the public and members of other emergency services, in particular the ambulance service who may encounter them whilst responding to emergency calls.”

“Therefore it is in the public interest that the constabulary are prepared for such an eventuality and that officers are correctly trained in appropriate techniques to dispatch the living dead and knowing the limits of their capacity in doing so.”

A review by Norfolk Police’s Information Compliance Manager, John McGuire, stated: “I have considered this as part of my review and I do not agree with the applicant. The probability of a plan being required is so remote that should resources be tasked in producing a plan it is likely to be in the public interest from the opposite view, due to the potentially ineffective use of resources against other operational priorities.”

What I find very difficult to understand is that despite the more feasible risk of a zombie attack in Norfolk, the Norfolk Constabulary consider me a serious risk to their organizational security and have spent ridiculous amounts of time and tax payers’ money to mitigate the supposed risk that I cause to them. Norfolk Constabulary have even gone as far as successfully applying for a Criminal Behaviour Order against me, which was awarded to them, but subsequently discharged by Recorder Wilson in November 2016, on the grounds that it was not helpful in preventing anti-social behaviour. He did, however, warn me that my behaviour was serious enough to warrant such an order.