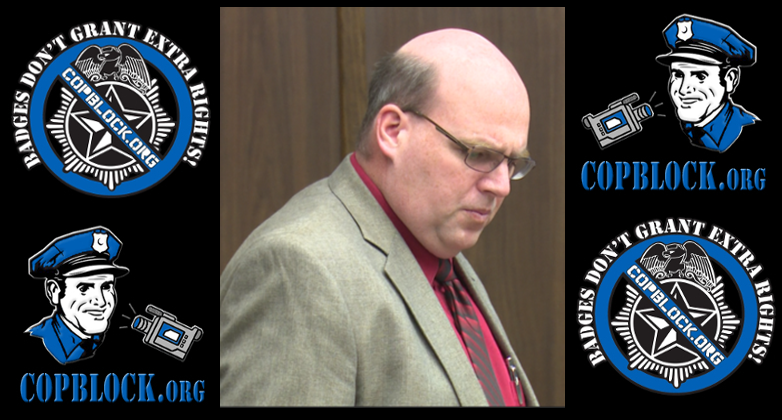 Officer Paul Hardwicke, a resource officer at Blackfoot High School in Idaho, was caught with his hand in the drug jar in May of 2015. According to the Idaho State Journal, Hardwicke was immediately given a paid vacation (but not arrested) after it was determined that he had stolen thousands of prescription pain killers. The drugs were stolen out of the drop boxes that were being used as part of a drug return program at the school.

Originally he was facing two counts of felony possession of a controlled substance, oxycodone and morphine, and two counts of misdemeanor possession of a controlled substance, tramadol and legend drug (a “legend” drug is what prescription drugs are, for some weird reason, legally called in Idaho). The felonies carry a maximum sentence of seven years in prison and a $15,000 fine each. The misdemeanor charges carry a maximum sentence of one year and a fine of $1,000 each. All told, he was potentially facing up to 16 years in prison.

Of course, he was wearing his Magic Uniform at the time, so that’s not at all what happened. Once he received his customary Policeman’s Discount, he ended up being sentenced to two whole days in jail. (There’s no word on whether he is eligible for good time and thus allowed to get out after one day.)

Via KTVB.com in Idaho Falls:

A former Blackfoot policeman and high school resource officer will spend two days in jail for stealing thousands of prescription painkillers from a drug drop box.

The Post Register reports that Paul Hardwicke pleaded guilty on Wednesday to misdemeanor counts of possession of a legend drug without a prescription and possession of drug paraphernalia. He was sentenced to 180 days in jail and two years of probation, but 178 days of the sentence were suspended.

Hardwicke’s attorney argued his client should get probation since he already lost his job.

Hardwicke was a school resource officer at Blackfoot High School before he was terminated. He started a drug drop box program when people were encouraged to discard unused prescription medications at the police station. Investigators found he was taking medication from the drop box.

And yeah, you read that last paragraph right, Officer Hardwicke is the one that started the drug drop box program in order to encourage residents to bring their unused prescription drugs to the police station for “disposal.” In spite of all the hypocrisy of him being one of those people that kidnap and hold people hostage for the same stuff he’s doing himself, you kinda have to admire this guy a little when you hear about that.

Between thinking far enough ahead to become a cop and secure that get out of jail free card that comes with it and then coming up with a scheme to get people to just bring drugs right to him for free, Hardwicke clearly was way ahead of the game. He slipped up a little at the end and now he’s gonna have to go get hired by another police department after his grueling two days of hard time, but he had a good plan going in.