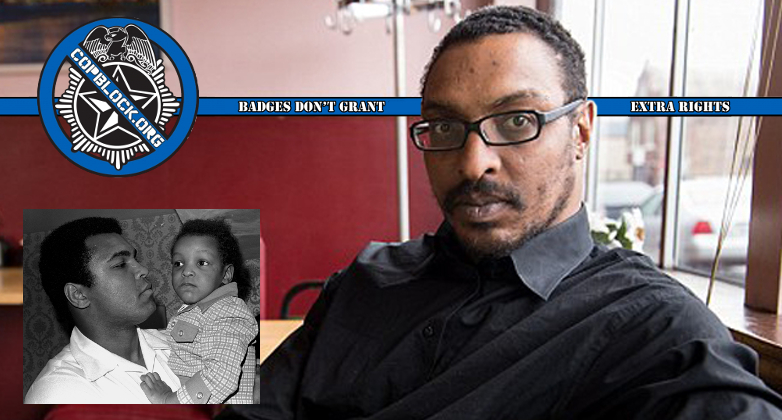 Earlier this month, Muhammad Ali Jr. was illegally detained and subjected to hours of questioning because they (correctly) suspected that he was a Muslim, based on his name. Ali Jr.’s namesake was, of course, probably the most famous athlete ever and one of the most well know people, in general. In addition to his success as a boxer, Muhammad Ali Sr. was known for his conversion to Islam after winning the heavyweight title, as well as his long history of civil and human rights (which really shouldn’t be two things) activism.

In spite of the fact that Ali Jr. is a citizen; having been born in Philadelphia; was traveling under a legal US passport, and has no criminal record, he and his mother, Khalilah Camacho-Ali, were detained for having Muslim sounding names. Camacho-Ali was fortunate enough to have a photo of her and her late ex-husband on her, so she was released. However, Ali Jr. was not so lucky and had to undergo additional questioning in which they grilled him about “where he got his name” and what his religion was. When he acknowledged being Muslim he was then subjected to further questioning. – For the record, it’s actually not (at this point) illegal to be a Muslim.

The 7 February incident was the first time the family had been detained or questioned in this way, despite regular international travel, (family lawyer Chris) Mancini said.

They consider it religious profiling linked to President Donald Trump’s campaign promise to bring in a “Muslim ban” and his now-suspended executive order banning citizens from seven Muslim-majority countries from entering the US.

“To the Ali family, it’s crystal clear that this is directly linked to Mr Trump’s efforts to ban Muslims from the United States,” Mancini said, adding that they were trying to find out how many others faced similar questioning, and were contemplating filing a federal lawsuit.

“Imagine walking into an airport and being asked about your religion,” Mancini told the paper. “This is classic customs profiling.”

Ali’s is the latest in a string of complaints about US immigration controls after the inauguration of Trump.

The former prime minister of Norway was held for nearly an hour at Washington Dulles airport earlier this month and questioned over a visit to Iran three years ago, which he had made to speak at a human rights conference.

Meanwhile, the best-selling Australian children’s book author Mem Fox has suggested she might never return to the US after she was detained and insulted by border control agents at Los Angeles international airport. The 70-year-old said she was left “sobbing like a baby” after two hours of questioning while on her way to a conference.

A British Muslim schoolteacher travelling to New York last week as a member of a school party from south Wales was denied entry to the US. The foreign secretary, Boris Johnson, had previously claimed the US government had committed to allowing all UK passport holders to enter the country.

It’s a bit ironic that the son of Muhammad Ali would be profiled as a “dangerous Muslim” (in spite of any evidence of ill intent whatsoever) to say the least. Ali Sr.’s refusal to serve in the Vietnam War and subsequent arrest and exile from boxing is one of his most celebrated and recognized acts. It also shows that the government’s travel ban, which isn’t even legally valid since it was struck down in court can be used to single out and illegally detain anyone that TSA agents decide they want to, regardless of their actual immigration status or criminal history.