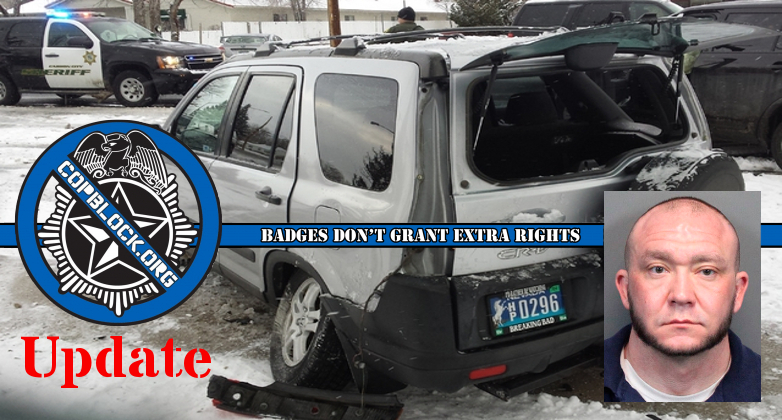 Just yesterday, I posted on the CopBlock Network about Robert Reasoner, a supervisor at the Nevada Transportation Authority, which overseas commercial drivers working for cabs, limos, and ride sharing companies, including Uber and Lyft. Reasoner had (finally) been suspended on January 6th after his fourth drunk driving arrest the day before when he was involved in two separate accidents. The final of those two being a hit and run, in which he totaled a parked car then took off back to his house.

As the saying goes, it gets better though. Since writing that, I came across information that Reasoner was actually arrested yet again. Earlier this month, while on suspension for the latest DUI, he was arrested for attempting to buy heroin. Apparently,  officers from the narcotics task force in Carson City had already been tipped off that he was “involved with illegal narcotics” as early as last summer, but for some reason hadn’t arrested him yet almost a year later.

Just for good measure he was drunk again and had an open bottle of vodka in the car. So, he now has five notches on his DUI trophy. ‘Cus you wanna have a good buzz going when you’re picking up heroin outside of a Steak and Shake. (For the record, I don’t actually know that it was a Steak and Shake. I’m #JusSayin)

The state task force officers had received tips this summer that Reasoner was involved with illegal narcotics.

“Everyone talks,” task force Sgt. Dan Johnson told the Review-Journal. “We live in the gutter in these (drug) units, and we start hearing things.”

Reasoner met a confidential informant Wednesday morning, gave him $160 and directed him to buy three grams of heroin for “him and his mother,” the police report said.

He asked the informant to mark two bags with an “R” for him in the event that the cooperating witness dropped off the drugs at his mother’s house when Reasoner was not there, police reports said.

At about 3:10 p.m., Reasoner and his mother, who has not been charged, left her Carson City house, driving to meet the confidential informant at a fast food restaurant. When Reasoner left the vehicle to go into the restaurant, officers arrested him.

Police suspected he was impaired and he had a half bottle of vodka. Police arrested him again for driving under the influence, records show.

This was Reasoner’s fifth suspected drunken driving arrest since 2006.

It is nice though that him and his mom share a common interest. Not enough people spend time getting high with their parents these days. That’s the kind of thing that’s gonna look good for him when they are looking for an excuse to give him probation after his plea deal comes through.