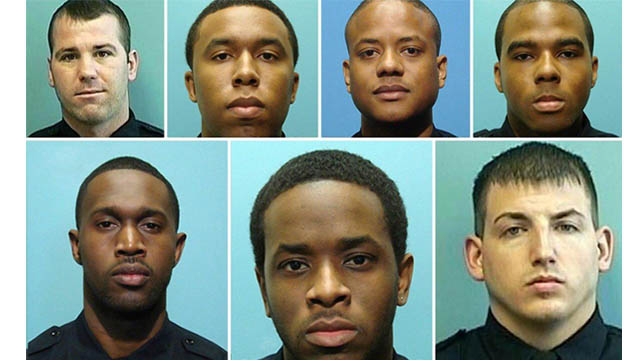 Yesterday, seven cops from the Baltimore Police Department were charged with multiple federal crimes in a racketeering indictment. Sgt. Wayne Jenkins and Detectives Momodu Gondo, Evodio Hendrix, Daniel Hersl, Jemell Rayam, Marcus Taylor, and Maurice Ward were all accused of “shaking down citizens” for cash, as well as filing false court paperwork and making fraudulent overtime claims. All seven were part of the “Gun Trace Task Force,” which worked to remove illegal guns from the streets in Baltimore.

In addition, Det. Gondo was also indicted on drug charges with five other people that are not police officers. That indictment included using inside information to tip off drug dealers regarding BPD investigations. Gondo was also accused of being directly involved in the drug operation itself.

The crimes were uncovered in the process of an ongoing probe by the FBI into a pattern of civil rights abuses perpetrated by members of the Baltimore police. That probe was initiated after attention was focused on the city by the murder of Freddie Gray in April of 2015 and the subsequent riots.

(United States Attorney Rod J.) Rosenstein accused the officers of participating in “a pernicious conspiracy scheme” that “tarnishes the reputation of all police officers.”

“These defendants were allegedly involved in stopping people who had not committed crimes, and not only seizing money but pocketing it,” he said. “These are really robberies by people wearing police uniforms.”

All seven officers appeared in handcuffs and street clothes for initial hearings in U.S. District Court in downtown Baltimore on Wednesday afternoon. Each was represented by a court-appointed attorney. Each affirmed he understood the charges against him.

All of the officers were ordered held pending detention hearings. Hearings for Gondo, Hendrix, Hersl, Jenkins, Rayam, and Ward were scheduled for Thursday. A hearing for Taylor was scheduled for Friday.

Prosecutors and the officers’ attorneys will argue at those hearings about whether the officers should be released before their trials.

Defense attorneys for the officers said they were still getting acquainted with the allegations in the indictment.

“These officers are entitled to due process and a fair trial in accordance with the Constitution and the laws of our state,” Ryan said in a statement. “It would be inappropriate for me to make any further comment until the charges leveled against these officers are finally resolved.”

Baltimore State’s Attorney Marilyn J. Mosby said the involvement of federal authorities “confirms the inherent difficulties with the BPD investigating itself,” and warned the indictment would have “pervasive implications on numerous active investigations and pending cases.”

Her office was not involved in the investigation, and was not informed of it until Wednesday morning…

Some of the officers have long been accused of using excessive force or of other wrongdoing. The city has paid out more than $500,000 in settlements in cases involving the officers, according to a review by The Baltimore Sun.

Members of the city’s state legislative delegation called for a federal investigation into Rayam in 2009 after he was involved in three shootings over the course of two years. The city has settled multiple lawsuits involving Hersl.

“The majority of these officers have been known to my attorneys as having significant credibility issues,” Baltimore Deputy Public Defender Natalie Finegar said. “We have aggressively been pursuing personnel records to be able to highlight the issues with their credibility on the force.”

As recently as October, the Police Department was praising the unit in an internal newsletter for its work getting guns off the streets. The unit made more than 110 gun arrests in less than 11 months last year…

In one incident in September, federal prosecutors said in court papers, the officers stopped an individual leaving a storage facility and said they had a warrant to search his storage unit. They did not, authorities said. Hersl, Jenkins and Rayam then took a sock containing $4,800 and removed $2,000, prosecutors said.

Rayam was recorded telling Gondo that he had “taxed” the man, prosecutors said.

“He won’t say nothing,” Rayam was recorded saying, according to prosecutors.

Prosecutors said the officers alerted each other to potential investigations into their activities, coached each other to give false testimony to internal affairs investigators, and turned off their body cameras to avoid recording their encounters.

The criminal activity occurred throughout 2016, prosecutors said. The Justice Department was investigating the department for much of the year.

The Justice Department and the city agreed to terms of a consent decree in January outlining sweeping reforms to the department. That agreement awaits approval by a federal judge.

“We wouldn’t be under a consent decree if we didn’t have issues,” Davis said. “We have issues.”

Meanwhile, the officers’ work was celebrated by the department. Lt. Chris O’Ree wrote in October that the seizure of 132 guns in less than 11 months was “no small task.”

“Their relentless pursuit to make our streets safer by removing guns and arresting the right people for the right reasons has made our City safer,” O’Ree wrote.

There’s several things that are interesting about this case. One is the fact that, just several months ago the Baltimore Police Department, who was not informed of the investigation until the indictments were ready to be filed, was praising the great work of these same officers. Despite that praise, even before these indictments, several of them already had a history of misconduct complaints, including allegations of violence.

Beyond that, the very nature of the case involves a bit of irony in the characterization of the crimes committed. In his speech while announcing the indictment, Rosenstein described what they were accused of this way: “These defendants were allegedly involved in stopping people who had not committed crimes, and not only seizing money but pocketing it. These are really robberies by people wearing police uniforms.”

Of course, if they had limited themselves to finding an excuse to stop drivers out on the highway, oftentimes whose only “crime” is having out of state license plates, then they could have legally and without any recourse taken whatever cash those drivers had on them. Such cash seizures require no conviction or even so much as the filing of criminal charges. In reality, you could say that the only difference between what they did and drug forfeiture laws was the part about them personally pocketing the money.

In fact, in essence the only real difference between the officially sanctioned robberies by people wearing Magic Uniforms and the ones these guys will eventually be given probation and/or community service for was that they didn’t give the government its cut of the profits from their self described “taxation.”