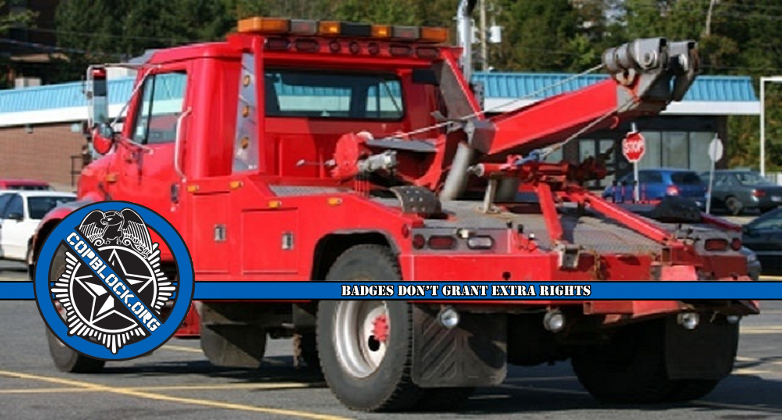 The following post was shared with the CopBlock Network by Denise Davis, via the CopBlock.org Submissions Page. Davis submission describes an incident in which Officer Radel of the Norfolk (NY) Police Department had her truck towed away and impounded, in spite of it being legally parked on her property. For those not wearing a Magic Uniform, that is generally known as auto theft.

On Sept. 23 2016, Officer Radel showed up at my house to tow my truck, a 1987 Nissan Hardbody from my driveway. Originally, the complaint stated that it was unlicensed and unregistered. When confronted with the fact that it was and had been insured, licensed, and registered, then she tried to claim it was “dismantled.” Not a criminal offense, but a code violation. However, the truck was not dismantled, although it still needs brakes done and a small amount of body and vinyl work to complete a restoration. It was NOT on blocks and an engine change over was complete, including hoses and belts!

I went to court every week the following October, as no tickets had been filed with the court and the police department at that time couldn’t find any tickets. The tickets were given to me September 25th, two days after the truck was towed, and had whiteout all over them and were dated 2015! After several court dates culminating in today, March 8th 2017, it has been stated the truck was illegally towed. The town attorney had once again not showed for court, but had asked the ADA to stand in.

He originally offered a contemplation of dismissal. When I refused, he threatened me with 15 days in jail and $150 in fines and additionally that I would be fined for every day the truck remained on the property. I had to point out that the truck had been removed just two days prior to getting the tickets! I then asked for the definition of dismantled, as the police or code enforcement officer had taken pictures earlier the same day of the towing. (Pictures taken on my lot without me having been there. I was working when they had came and until court hadn’t known they had been there.) Those pictures clearly showed it was whole and not even on blocks.

A date for jury trial was set for May 22nd, at which time the ADA left, only to storm back in and try to have the case dismissed outright as admittedly they had no right to have taken the truck to begin with. The judge is waiting at this point to accept dismissal, as my attorney told him (Judge Grubee) that I was unwilling to let it go unless my truck is returned. But at this point it looks like it will just be dismissed, with them being allowed to keep my truck.Even after all parties (except the police) admitting they had no right to steal the truck to begin with.

By dismissing the case, it will turn it into a civil case that no attorney wants to touch because their fees would be more than the truck is valued at. (The Kelly Blue Book value for it in this area is $3,441.) So, it’s looking like they are being allowed to steal from me with no repercussions.

Incidentally, behind the courthouse is a Suburban cop car with an inspection sticker that expired in August 2015 which hasn’t been moved in months. Two houses behind that is the house of the judge’s daughter where a truck belonging to the judge is parked off the road with no plates, etc.