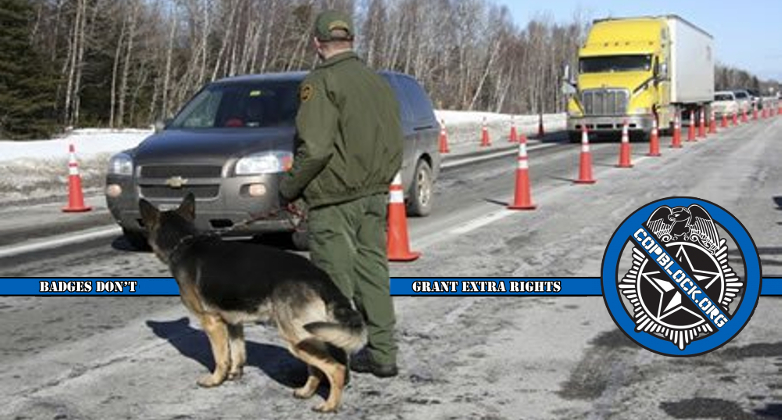 Christopher Minnick submitted his story about how remaining silent and refusing to answer any questions at an internal immigration checkpoint landed him in federal lockup and fighting criminal assault charges against a federal agent.

I had been put in federal prison for eleven days from Oct 31st – Nov 10th. I had to be quiet about what happened since my case was ongoing. But, last month the government dropped their case and I will let everyone know what happened.

I was driving from Laredo TX to Charlotte NC. I hadn’t gone more than 25 miles before I had to stop at an internal immigration checkpoint. For those unaware, the government has set up checkpoints within 100 miles of the border to stop traffic and ask what I feel are invasive questions to every and all vehicles that stop. Remember, none of the drivers or passengers have been suspected of a crime.

According to my understanding of the fourth and fifth amendment as a free citizen you are not obligated to answer any questions if:

As I was not suspected of a crime, when asked “are you a U.S. citizen?” I responded “Sir, respectfully, I do not wish to answer any questions.” Clearly phased by my response, he asked the question again. To which I responded with the same answer.

He then asked if I had anyone else in the truck. A little surprised he kept asking questions, I gave what I’d describe as the face Jim Halpert from “The Office” gives when someone says something silly. He called for another officer to use a dog around my truck and trailer and then called over his supervisor. Immediately, the supervisor asked the same question, “Are you a U.S. citizen?” To which I responded “Respectfully sir, I do not wish to answer any questions.” He then proceeded to ask the question countless more times. After the first barrage, he asked if I’d go to secondary inspection.

For those unaware, pulling into secondary inspection is a complicit agreement for a search of your vehicle and person. I told him “No thank you, if I am not being detained I would like to be free to go on my way.” He said “You are being detained.” I asked “For what crime?” To which he said “You’ll find out.” I again, waited for them to let me go on my way waiting through an onslaught of “where are you headed?” “Why don’t you want to answer our questions?” And “what are you trying to prove?” All met with silence, waiting for my permission to leave. That permission never came…

I had to check in with a bond officer every week, then every month for over 14 months.

When the officer told me I was under arrest for an undisclosed charge. I had placed my phone to record video but when I retrieved my phone later the video either had been deleted or something had malfunctioned.

I sat in a holding cell for about four hours after they had stolen my wallet without my permission, been fingerprinted, and photographed. Four hours passed before ICE agents came to read me my rights and tell me what they were charging me with. They said, “you have the right to remain silent, anything you say…” I asked if I always have the right to remain silent and if so, why didn’t I have that right earlier when I was arrested for precisely that. They had no answer.

I was charged with 18 U.S. Code § 111 – forcibly assaulting, resisting, or impeding certain officers or employees.

From there, I went to county lock up because it was a Saturday and federal lock up only works on the weekdays. On Monday, I was sent to the Geo group federal prison. With no way to contact my public defender until the 9th of November. When I was allowed to contact my public defender, I was released on bond the very next day on personal recognizance.

Once I was out, the real problems began. I took a Greyhound bus from Laredo TX to Greenville, SC. With little money and an extra bag fee for every bag, I had to leave some of my belongings in Laredo to be stolen. I was notified that I had lost my truck driving job with Schneider. And that I would not be able to leave the state of South Carolina because that’s where my bond officer was. Taking a new interstate truck driving

job was out of the question. After a month of unemployment, I got a cooking job for far less money, forcing me to live with my brother and put a burden on him. After the new year, I got a small-time local dump truck job. Paying way below normal because they knew I was desperate to make use of my CDL. I had to check in with a bond officer every week, then every month for over 14 months. Until finally, after what I assume was the judge’s frustration with the prosecution to make some sort of case, the government relented and filed a motion to dismiss my case.

This post is just to inform the curious and illuminate the system for those who believe that law enforcement are always in the right. I hold no ill-will to those who work at these checkpoints, but I would like to plead that they read the law and know where the bounds of their power truly are. If there is a crime, yes detain a suspect. If there’s an emergency, yes ask questions and expect an answer. But if you are asking a question to a citizen with a rationale not pertaining to anything beyond the fact you’ve come into contact with them. I advise you to not ruin their lives in the moment to save your bruised ego.