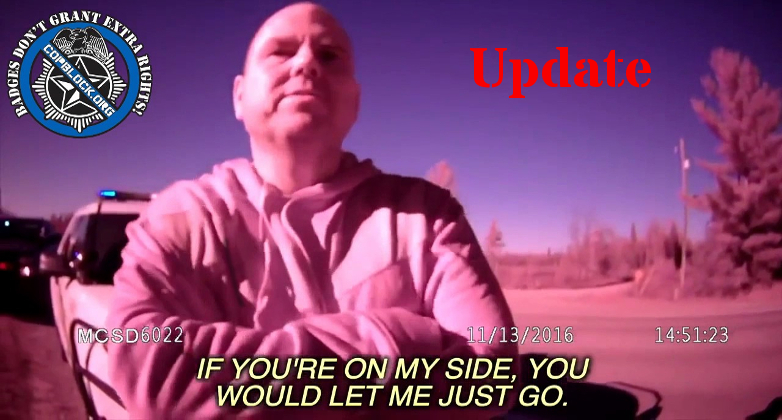 Lt. Brian Filipiak of the Washtenaw County Sheriff’s Office became a bit of a YouTube star after a video surfaced of him being stopped for driving drunk in November and insisting that the Montmorency County deputies “just let him go.” Instead of being hauled out of the car and beaten then handcuffed and shoved into the back of a patrol car, Filipiak was allowed to spend over thirty minutes making his meandering, slurred argument that they should make a “Brotha’s deal” and look the other way while he either continues on or sleeps it off on the side of the road.

Even after he is finally convinced to come out of the truck by the threat of being tazed, Lt. Filipiak is argumentative and even physically resistant once they finally try to put him into the back of a patrol car. He, of course, wasn’t charged with resisting or even obstruction, as any mere mortal without a Magic Uniform would be. And early last month when he went to court for the first time, he was given the customary plea deal for a dramatically reduced charge that cops facing trial should (and obviously do) readily expect.

However, there’s no way the courts would give a minor slap on the wrist to a high ranking cop who was caught on a viral video telling other cops to just let him go and stating matter of factly that he and the other officers in his department would do just that if they stopped another police officer driving drunk. Especially if that cop was not just drunk, but “super drunk” and had a long history of well documented drunken incidents even before this one. There’s obviously no way they would just gloss this over and “just let him go,” if for no other reason than for the sake of appearances. This is the one guy they’d have to make an example of, for sure.

Or maybe they would not only just give him a short probation sentence, but also even keep him on the department payroll.

A former Washtenaw County Sheriff’s Office lieutenant was sentenced Friday, March 3, to one year of probation and 40 hours of community service for drunken driving.

A northern Michigan judge also gave Brian Filipiak a 93-day deferred jail sentence, which means he will only serve the time if he violates probation…

Filipiak was arrested in Rust Township with a blood-alcohol level of 0.28 – more than three times the legal limit. A deputy’s body camera footage showed Filipiak trying to talk his way out of the arrest based on his position as a lieutenant in Washtenaw County.

Filipiak has lost the title and pay of a lieutenant, but remains employed at the Washtenaw County Sheriff’s Office. He no longer is a sworn officer, the department said.

He was placed on unpaid administrative leave during the internal investigation and is now employed on a conditional basis working in a support capacity at reduced pay, officials said.

Lt. Filipiak feels really bad though, much worse than the time he had to be ordered to leave his own house during a drunken domestic dispute with his wife or the time he admitted to driving while drunk to the airport to pick up his daughter and then insisted he was going to drive home when confronted by Wayne County police officers. And he even stated that those cops who insisted on arresting him had done some mighty fine police work that day. Plus, unlike every other person who has ever been arrested, including all the ones he has arrested himself during his 21 year career for driving drunk, this has destroyed Lt. Filipiak’s life. (The guy’s lost at least $15,000 a year from his measly $79,000 salary for God’s sake.)

And he’ll have a lot of time (40 whole hours) to think about it as he’s performing the community service that is pretty much the only tangible punishment he was given for his Super Drunk Country Drive.