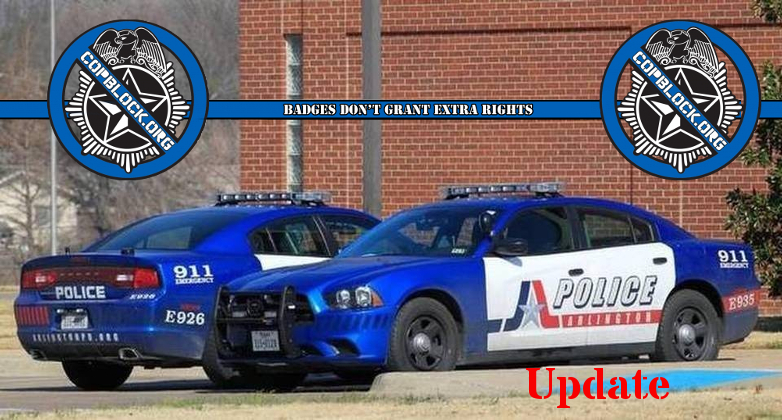 In December, I posted about what was at the time 12 Arlington Texas cops who had either been fired or resigned for turning in fake tickets they had written to people that didn’t actually exist, oftentimes using the same license plate number in the imaginary citations. Their actions were discovered when department supervisors attempted to review dashcam video from the stops. That footage obviously didn’t exist, since they weren’t really stopping anyone. Apparently, the reason behind these phantom traffic stops was in order to keep up with department quotas.

They are accused of lying about traffic stop reports, tampering with governmental records, and conduct unbecoming a police officer, the press release said.

Their cases have been forwarded to the Tarrant County District Attorney’s Office, which will determine if criminal charges will be filed.

The accused officers reported on their in-car computers that they had made a traffic stop at a particular address but did not give any names, a source close to the investigation had said.

The allegedly falsified stops were discovered when supervisors could not find accompanying dash cam video of the stops.

Officers are required to report driver demographics, the reason for the traffic stop, whether an arrest occurred and whether a search was conducted during the stop, said Cook, the police spokesman. That data is used to compile the department’s annual racial-profiling report.

Earlier this month, it was announced that all 16 of the officers originally suspected of writing fake tickets have been given plea deals to either avoid being indicted or have previously filed indictments dismissed in exchange for resigning and giving up their peace officer licenses, thereby preventing them from working as police officers again.

Roughly nine months after 16 police officers were placed on leave during an investigation into fake traffic stops, all of them will avoid prosecution.

Eleven of the officers agreed to plea bargains early on and gave up their peace officer licenses to avoid indictments.  Five of them were actually indicted but later took the same deal to have the indictments dismissed.

“Dane Peterson, Dace Warren, Brandon Jones and Chris McCright were indicted for tampering with a governmental record in multiple indictments,” the district attorney’s office said in a statement. “Chris Dockery was indicted in one multiple count indictment. All of the officers agreed to give up their TCOLE licenses, and we have dismissed the indictments against each other.”

There’s no mention of the investigation that should be taking place into the illegal ticket quotas imposed by the department that apparently led to the fake ticket scandal in the first place. Of course, that might be the reason that all these cops who were caught red handed breaking several laws got a deal which prevents them from needing to testify in court about it during their trials.