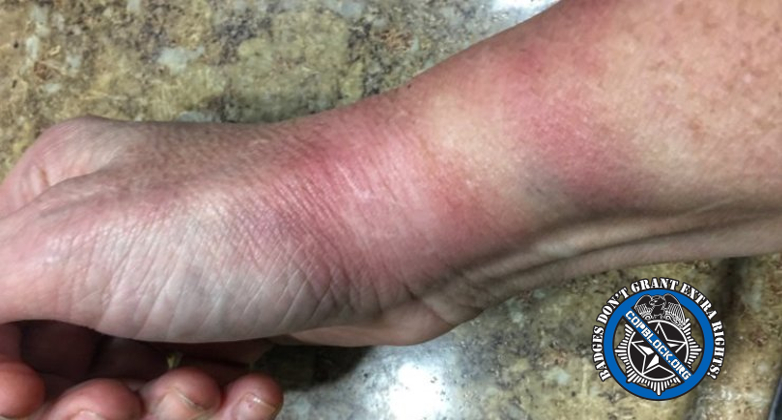 The following was submitted by J Masters, the ex wife of an ex cop. She was arrested and attacked for “public intoxication” by officers with the Carrolton Police Department after her tire went flat on the way home from a girls night out. Initially she was pleased that the officer had stopped and was hoping he would assist her with the routine changing of her tire. However, quickly the situation escalated into her worst nightmare.

At 2am, I was stopped on side of highway trying to put my spare tire on as my tire shredded. I’m a 53-year-old female and had been out with girlfriends. It was freezing and I was struggling. A cop pulled up and I was thankful as I thought he was going to help me. We spoke less than 10 words before went back to his car and instead of helping me arrested me for what he called “public intoxication.”

I had two drinks the whole night, one at 8:30 and another at 9:30. He was aggressive with me, never read my rights, no breathalyzer, no walk-the-line…. nothing. He drops me at the detention center and six detention cops began shoving, man-handling me, and dumping all my belongings. They were extremely controlling and aggressive. I told them to stop. I am a victim of gang rape, kidnapping, and multiple other rapes. My ex husband who is an ex cop strangled our son having almost killed him then he pulled a .44 magnum on me.

I told them this so they would understand not to treat me the way they were because if only makes me like a caged animal. What do caged animals do? Fight back. I am not a physical person but began swearing and kept telling them to stop. They grabbed my money, I grabbed it back and said that I’d like to count it so I know what I’ve got. They tried to take it from me and I clenched my hand around it. Four men got on me and used their physical power to take it. I went to the restroom and upon coming back they shoved me into a concrete cell. Through out the night and morning I was treated like an animal and scum. When they all got on me it brought back flashbacks to a gang rape and a kidnapping.

I have reported it to one of their sergeants and intend on taking further action. Any contacts anyone can provide me with is greatly appreciated. There is much more in the story but that is the basics. – J Masters

What’s truly disgusting about the behavior of these officers, is that despite that fact that she told them she was the victim of intense trauma and gang rape the officers never once changed their demeanor towards her. Regardless of the fact that she was only being held on suspicion of public intoxication.

If you have a story of police misconduct or brutality share it with the CopBlock Network using the submit page. If you would like to become a contributor to the CopBlock Network check out the roles available and start sharing the message that “badges don’t grant extra rights“.

What Rights Do I Have When I’ve Been Arrested?

Get Connected with Local CB Affiliates