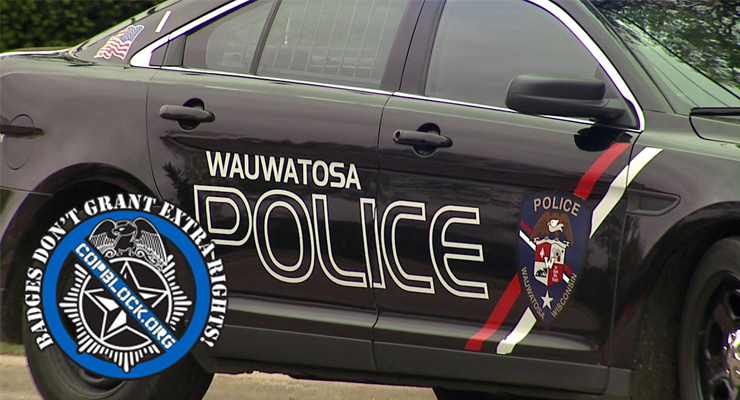 After over 60 days, the Wauwatosa (Tosa) Police Department finally released an ex-detective’s 2013 resignation letter. However, WPD redacted large swaths in an admitted effort to protect their officers’ reputations. Its unaltered portions included accusations of systematically silencing problematic, dissenting, or disliked personnel. According to ex-detective Robin Schumacher, these usually jeopardized an officer’s safety. Highlights of a cover letter from WPD to contributors on what’s redacted, and why.

Later requests were then delayed and bounced around the city. Tosa PD administrative Lieutenant Jack Morrison stated he didn’t have access to it, and went higher up command. Later inquiries revealed these new requests made their way to the city attorney. This subsequently drew more questions at what exactly WPD initially provided. Not only that, but why did the first request come so quickly?

Oddly enough, a copy of this “letter” was included with the finial 25 page response. Equally strange was the absence of Schumacher’s signature, or notes from Chief Weber. Besides these, the two pages are identical. Wauwatosa Now obtained this in 2015, but focused solely on Schumacher’s alleged sexual harassment. They didn’t cover her whistle blowing on other misconduct she’d witnessed or experienced.

The running theme was loose lips sink ships, follow orders without question, and don’t complain. In the document, Schumacher describes a particular form of retaliation she’d experienced after first reporting harassment to supervisors. This particular supervisor, whose name was redacted, observed some of this harassment.

While he allegedly called the accosting comment “a good one,” he privately apologized.  The banter, she recalled, was so embarrassing that an unidentified officer “grabbed his squad bag and left the station.” According to Schumacher, the conversation with the supervisor was private “to avoid any further embarrassment to both of us.” It’s unclear, however, if this was the same person who left the station following Schumacher’s hazing.

He also didn’t want other officers to question his leadership abilities or authority. When Schumacher highlighted the danger in dismissing such comments, he allegedly disagreed. “I was told that I was the person who was openly gay,” Schumacher described, “and if I didn’t want anyone to talk about me being gay, that I shouldn’t be ‘out’ at work.”

Shortly afterward, Schumacher claimed closeted gay female officers contacted her. They were worried that Schumacher “outed” them, which she denied. Her resignation letter recounts feelings that this was a result of a “fishing expedition” to identify every gay officer. Schumacher claimed she was the only openly gay WPD officer at that time. She began to feel that female officers were being pinned against one another to degrade their unity. The same day she first spoke with closeted officers, Schumacher was put on notice.

“Toward the end of my shift that night, I stopped a vehicle and asked for a second squad to back me up on a consent search of a vehicle. The responding officer arrived to back me up, but parked a half of a block away. It was a clear message that my co-workers didn’t want to have contact with me. This was a common practice by veteran officers on our department at that time to silence newer officers when problems would arise.” — ex-detective Robin Schumacher, Wauwatosa PD (Pg.3)

Later on, after enduring harassment of varied kinds; being forced to cover “illegal behavior,” and dismissed by department leadership, she became the target of an internal investigation. She recalled “a pimp named [redacted] claimed our department lost his money.” Although other investigations cleared her, supervisor’s allegedly told officers–who were once under investigation–that Schumacher was now the target. As a result, the message was sent that “I would NEVER get back up from that point forward.”

Another operation saw Schumacher at the helm of a planned drug sting. Documents claim WPD was targeting two suspects in one vehicle shipping drugs. The plan depended on overwhelming them with cruisers and several officers, containing the situation and preventing a chase. However, Schumacher claims when she gave the order, only one officer helped. Other’s who disagreed with the plan, Schumacher claimed, stayed “at the top of the hill.”

The former detective was also reminded regularly of how certain officers “couldn’t stand any snitches.” “The message was conveyed loud and clear”, Schumacher wrote, “I had to keep my mouth shut from this point forward.” Towards the end, Schumacher asserts she wasn’t the only officer under pressure at WPD. She stated officers, whose names are redacted, “instilled the fear in me, as well as other officers about losing their jobs when speaking up about wrongdoing at our department.”

“At Wauwatosa PD, we keep our issues within the department walls. Speaking up results in our career’s being held over our heads. I have had this message beaten over my head by many supervisors, including [redacted].”– ex-detective Robin Schumacher, Wauwatosa PD. (Pg. 22)

Entire paragraphs of this portion of Schumacher’s letter, in fact, are redacted. This makes it difficult to determine with certainty a sequence of events in this regard. However, it’s clear that mention of Schumacher’s issue’s was given a jarring message. An example of some of the most heavily redacted pages, (Pg. 16)

“I’ll ask the department to cover those third shift guys,” stated a likely supervisor–speaking of officers who’d participated in gory investigation–“but not for any other pussy.” She’d also been called that after being electrocuted, and thrown 10ft across a room.  In that incident, Schumacher was allegedly accused of “faking” her injuries. Supervisors also reputedly denied a doctors note and forced her back to work the following day.

Upon being arrested for allegedly stealing prescription pills from the evidence room, Schumacher made a stunning confession. Schumacher says, “I would rather be thought of as a junkie by the district attorney’s office rather than explain EVERYTHING.” The disgruntled detective literally begged authorities “to no longer turn a blind eye.” “I kept my loyal promise to the department to not discuss departmental issues outside of the station.”

Wauwatosa PD has largely operated under the radar for years. Oftentimes, even residents are unclear as to what all the department does in the suburb. Questions like how WPD collects and analyzes cell phone data, and under what circumstances, abound. Similar questions linger over the department’s largely undocumented teenage crackdown from 2012-2014.

Whereas claims of cover ups were largely discounted in the past, Schumacher’s letter suggests this is common practice. Nothing gets outside WPD that it doesn’t want, and people pay if it does. This was one of the clearest messages emanating from Robin Schumacher’s resignation letter.

These accusations are particularly timely with WPD’s last shooting incident involving officer Joseph Mensah. After shooting 25 year old Jay Anderson for allegedly reaching for an unseen gun, Mensah was ghosted by WPD. Months went by without his name or status being provided by the department.

Anderson was Mensah’s second kill in under a year, having only arrived in 2015. Anderson’s family question’s whether Mensah received psychological help after the first shooting. They also wonder why he didn’t have a partner, and why WPD is his third department in five years. Though little could initially be made of these speculations, Schumacher’s letter gives them new life.

The longer WPD cover’s up it’s own wrongdoing, the more lives will be affected. Wauwatosa residents must consider what actually occurs in their own back yard with their tax dollars. Jay Anderson’s case strained WPD’s ability to keep things under wraps, but didn’t break it. Judging by the silencing of officers Schumacher describes, it would seem WPD’s greatest weakness is visibility.